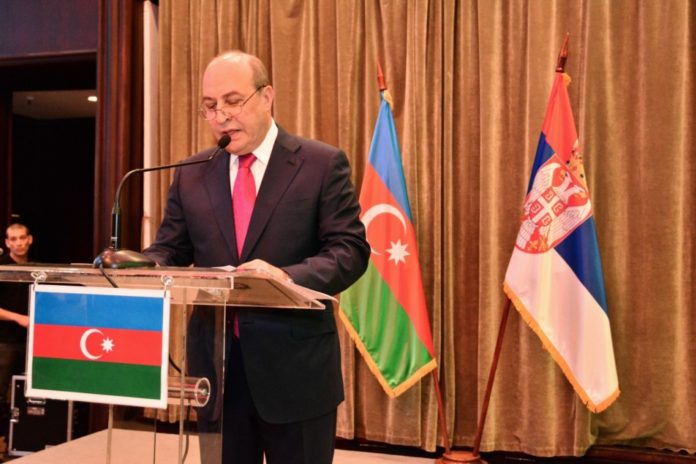 On the occasion of the National Day of the Republic of Azerbaijan – Republic Day, the Embassy of Azerbaijan organised an official reception at the hotel “Hyatt Regency” in Belgrade, on 27th May 2016.

Mr. Eldar Hasanov, Ambassador Extraordinary and Plenipotentiary of the Republic of Azerbaijan in the Republic of Serbia said in his speech at the event,  that the adoption of the “Declaration of Independence” of Azerbaijani Democratic Republic, the first republic with a democratic parliament throughout the Muslim East was established 98 years ago on 28th May 1918. Ambassador of Azerbaijan said that as a result of a long battle for the freedom of the Azerbaijani people and due to historical conditions, created by the disintegration of the Soviet Union, Azerbaijan restored its independence on 18 October 1991 adopting the “Constitutional Act on State Independence”.

The Ambassador stressed that the 28th of May was one of the most important days in the history of Azerbaijan’s statehood and that today Azerbaijan Republic the legal successor of the Azerbaijani Democratic Republic – the first secular, legal and democratic state in the Muslim East.

It was pointed out that this year Azerbaijan, also with pride and joy, celebrates the 25th anniversary of restoration of its state independence, and that Azerbaijan, under the leadership of the President Ilham Aliyev has created social and economic development, democratic reforms, the implementation of energy and large-scale transport projects, independent foreign policy and that Azerbaijan has become one of the countries with the fastest development in the world.

Present at the event were informed about the rich traditions of multiculturalism in Azerbaijan.