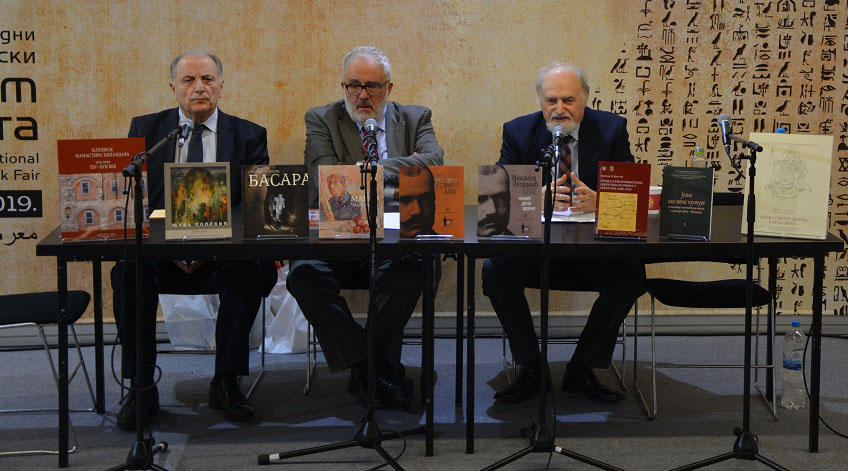 Presentation of SASA Publications at the Belgrade Book Fair

It was pointed out that SASA had published 61 titles, including 16 conference proceedings, 12 monographs, 17 catalogues, 10 editions of journals, four bibliographies, one book of documentary records and a volume of the Serbian Encyclopaedia co-published with Matica Srpska from Novi Sad and Zavod za udžbenike from Belgrade.

The most significant titles mentioned are: the Proceedings from the scientific gathering ‘Stojan Novaković – on the occasion of 175th Anniversary of the Birth’, a representative monograph in the Serbian and English Language Mihailo Petrović Alas: life, work, times; catalogues of exhibitions organized at the SASA Gallery: Mihailo Petrović Alas: Founder of the Serbian Mathematical School (both in Serbian and English), Marko Čelebonović, Svetomir Arsić Basara and Ljuba Popović (catalogue in Serbian, English and French); Records on Serbian-Croatian Relations and the Serbs in Croatia (1848-1914) by Academician Vasilije Krestić (co-published with the Archives of Serbia); a the monograph The Church of Saint George in Rečani dedicated to a completely destroyed church in Rečani in Kosovo and Metohija. The authors of drawings and accompanying texts are Marijana Marković and Bojana Stevanovič, PhD, and the editors of the book were corresponding members Miodrag Marković and Dragan Vojvodić. Shortly before the Book Fair, the monograph The Inscriptions of the Monastery of Chilandar. Volume I, XIV–XVII Century by Academician Gojko Subotić, Bojan Miljković and late Nikola Dudić was published. The editor-in-chief was Academician Mirjana Živojinović and it was co-published with the Institute of Byzantine Studies and the Monastery of Chilandar.

The digitization of all SASA publications was announced, therefore it is expected that all 15 000 monographs and texts published by SASA in the last 178 years will be available on the Internet in the following five years.