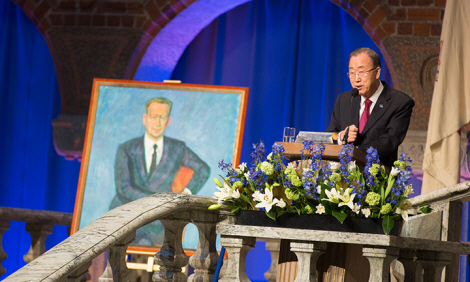 Then Ban Ki-moon went to Stockholm City Hall to hold the annual lecture in memory of Dag Hammarskjöld:

“Our shared challenge is to shape this new world for the better − to build a landscape of opportunity and peace, while conquering persistent injustices, from hatred to hunger. Around the world, we are being tested in old ways that Hammarskjöld would have recognized − and in new ways for which his example can remain our guide.

Massive displacement – the most since the Second World War. Terrorism. Atrocious crimes that defy all norms of humanity.

At such times, the United Nations relies on its strongest supporters to step up, speak out and stay true.

Read more, see photos and watch listen to the lecture at the web site of Dag Hammarskjöld Foundation here.

See the press conference with Prime Minister Stefan Löfven and UN Secretary-General Ban Ki-moon at the web site of the Government Offices of Sweden here.

Read the whole speech at the UN web site here.