Thursday 27 September the Opera Theatre Madlenianum opened its 21st season with the premiere revival of the opera PAGLIACCI by R. Leoncavallo. This veristic opera is one of the titles which every world-renowned opera house has in its repertoire. After its premiere in 2011, the opera Pagliacci, in staging and direction of the Russian Director Yuri Alexandrov, this time under the baton of the maestro Djordje Stankovic, is again in front of domestic audience. 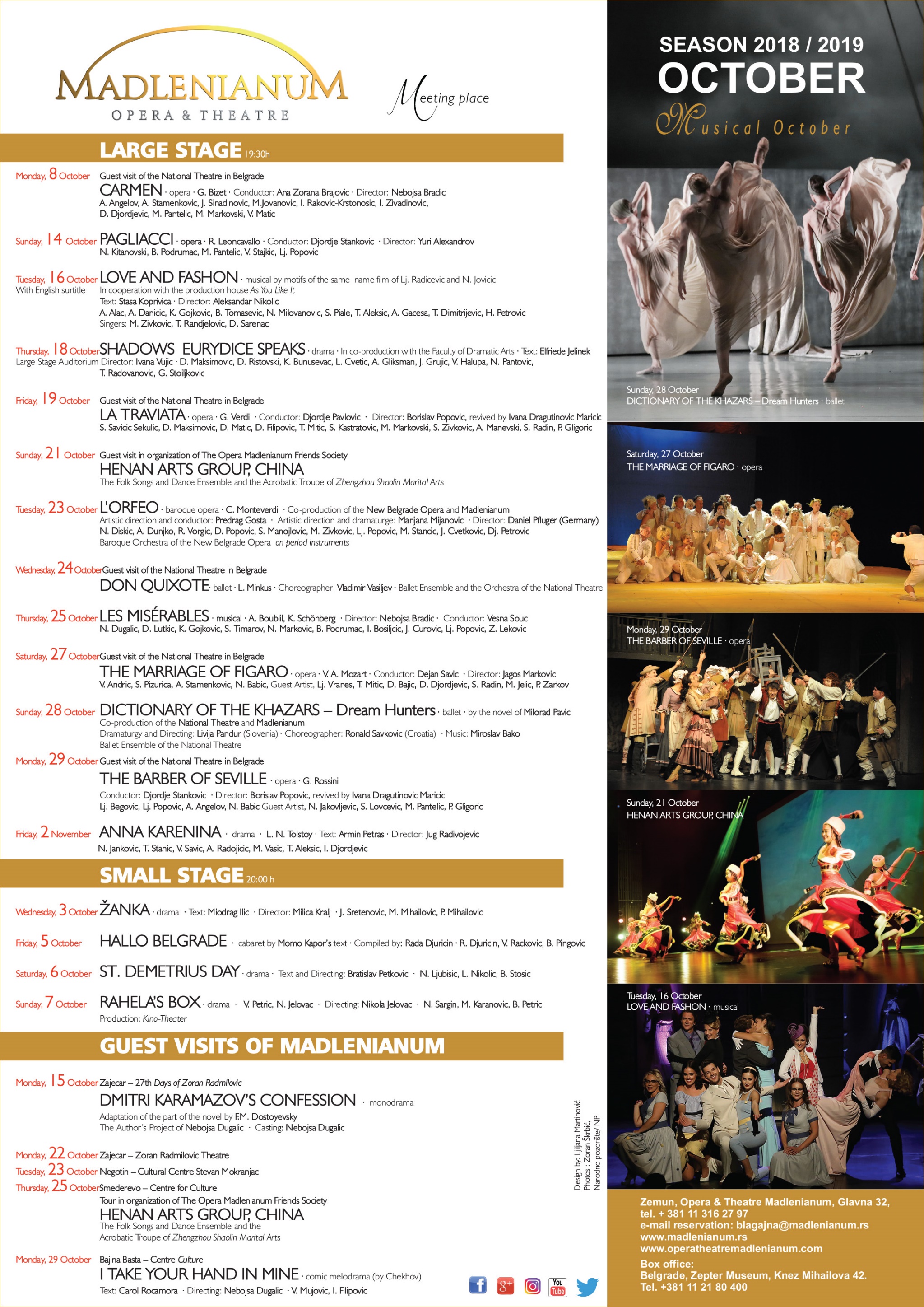 “The younger team of singers has been led by an experienced Nikola Kitanovski, who has with a lot of emotions and great acting sung the famous tenor aria as well as the whole performance. Thanks to him, Leoncavallo’s piece of art obtained the characteristics of bel canto. Soprano Branislava Podrumac, who we know for her opera roles and performances in musicals, has turned out to be a perfect solution for the character of the passionate heroine Nedda. The duet of Nedda and Silvio, interpreted by Vasa Stajkic, should be particularly pointed out; the duet where two voices have created a harmonious whole and through which was reached a beautifully achieved integration of their voices’ colours. A tension between two singers was expressed through erotized voice and movement gestures and it represented the true announcement of the murder of these two characters committed by Canio in his heat of basic passion. As for singing, Vasa Stajkic was assertive, so the soft and nicely shaped baritone colour could be fully expressed. A remarkable role of a hunchback Tonio has been performed by baritone Marko Pantelic. Short temper expressed through singing and well performed acting gestures have led to creating the character whose psychology of a rejected man and an avenger is built of an extreme unrest. Pantelic’s role in this opera was remarkable and it will be remembered for good singing. Considering the fact that in the setting of the opera Pagliacci the best of the younger singers on the opera scene took part, such a setting would be unavoidable without Ljubomir Popovic, a tenor whom we know by excellent opera and concert performances. The role of Beppe, a Harlequin was minor, but from the singing and acting side, extremely well performed. The ensemble was led by a conductor Djordje Stankovic who was precise in his instructions and who managed to make the orchestra one of the constituent part of the opera. Thanks to the Director’s requirements, the role of the choir has been given the extraordinary significance”, we quote the impressions from premiere of our respected music critic Srdjan Teparic.

The first revival of Pagliacci is on October 14.

The word is about the classics from the national house repertoire, which cannot be seen in the production of Madlenianum, as it strives for modern expression. The guest visits will be opened with the opera Carmen by G. Bizet on October 8, with Aleksandra Angelov in the title role, followed by the opera La Traviata by G. Verdi on October 19, with Snezana Savicic Sekulic and Dejan Maksimovic, the opera The Marriage of Figaro by V. Mozart, on October 27, with Vladimir Andric and Nebojsa Babic, guest artist and the opera The Barber of Seville by G. Rossini on October 29, with Ljubodrag Begovic and Ljubomir Popovic.

The ballet Don Quixote by L. Minkus, in the choreography of a famous Russian choreographer Vladimir Vasiljev, will also be performed on October 24.

Fans of musical performances will be able to see the music performances from the repertoire of Madlenianum and first among the musicals will be Love and Fashion, with English surtitle on October 16 and Les Misérables on October 25 in its 12th season on our stage. The opera Orpheus is again on our stage on October 23 after having a long pause as it is difficult to put it in the repertoire due to its international casting, nevertheless in the meanwhile this opera has received the significant awards as the best performance in the previous year. The ballet Dictionary of the Khazars, based on the famous novel by Milorad Pavic, is to be performed again on October 28.

We are also to host (October 21) of the Tour of Henan Arts Group from China, with their Dance and Song Ensemble and the Acrobatic Troupe of Zhongyue which will show us famous Shaolin Marital Arts. In the organization of The Opera Madlenianum Friends Society they will have their small tour through Eastern Serbia, visiting the towns of Zajecar, Negotin and Smederevo.

You will soon be able to buy tickets online as well, we want to GET CLOSER TO YOU.