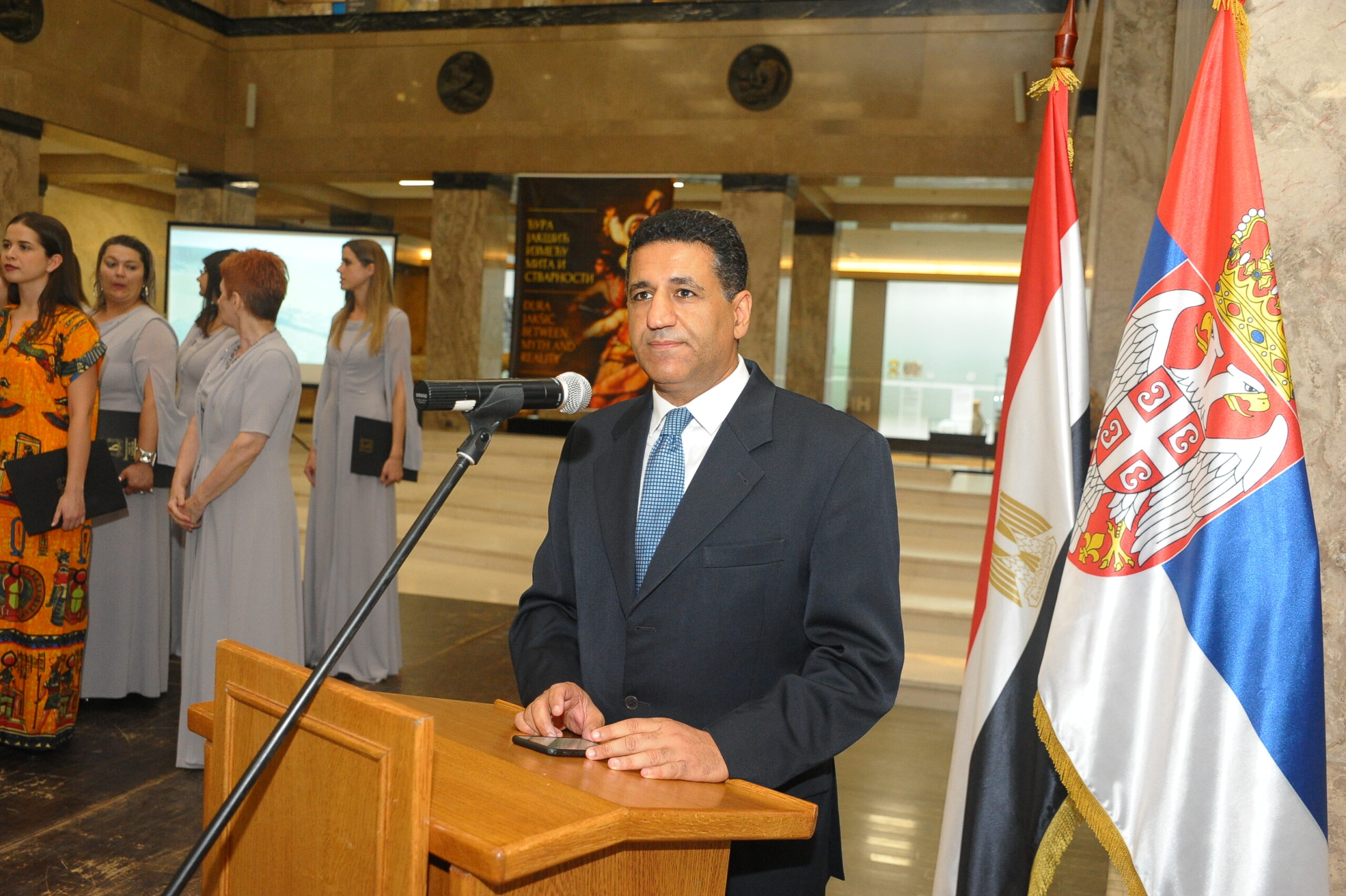 The Ambassador of Egypt in Serbia, Amr Aljowaily, hosted the National Day celebration, attended by Speaker of the National Assembly, Deputy Prime Ministers, Ministers of Interior, Labor and Technological Development among a large number of prominent figures from the political, cultural, economic, social and media circles in Serbia, in addition to accredited ambassadors of the diplomatic corps.

“The hosting of the National Museum for the celebration is a most commendable initiative recalling that last year the National Theater also hosted the National Day of Egypt, which reflects the unique appreciation of the Egyptian civilization in Serbia”, Aljowaily highlighted, He added that distinguished invitees were given a special guided tours by renowned Serbian Egyptologists of the ancient Egyptian artifacts in the museum, especially the “Belgrade Mummy (Nesmine)”, which was recently moved from its previous location at the University of Belgrade. “In recognition of the initiative of Mrs. Bojana Boric Breskovic Director of the National Museum, the renowned Reda Folkloric troop of Egypt performed a number of traditional dances, one of which honored the Serbian and Egyptian flags at the Atrium of the Museum, demonstrating the friendship between the two countries”, said Aljowaily.

The Ambassador of Egypt in Belgrade highlighted that the celebration was not limited to the history of ancient Egypt but also presented the features of contemporary Egyptian civilization through the performances of the Reda band and classical Arabic music performed by famous artist Shady Shamel, currently visiting Serbia for joint artistic productions, while the Barili choir headed by Mrs. Katalin Tasic performed the Egyptian national anthem after intensive practice for performing it in Arabic.

The celebration also included Virtual Reality experiences by CEO of VR-All-Art, Vitomir Jevremovic. enabling browsing Egyptian antiquities available in the public domain, including those available by lead cultural institutions in Egypt attempting to digitize the cultural heritage of Egypt to make it accessible to those interested in it electronically, also addressing the youth generation as future leaders. Ambassador of Egypt in Belgrade Amr Aljowaily commended the initiative of the National Museum to devote a special section to the “Belgrade Mummy” as a model of cultural cooperation between the two countries, revealing that there are many ideas currently being explored to utilize the advanced industry of information and communication technology in Serbia to bring Ancient Egyptian antiquities to the wider Serbian public through virtual and augmented reality.

In his address to the audience, Aljowaily reviewed the positive developments in the Egyptian-Serbian relations during the past two years. He praised the exchange of high-level visits between Speakers of the two parliaments, Ministers of Foreign Affairs and Agriculture, the establishment of the Joint Business Council for the first time, as well as pioneer cultural activities, revealing that the coming period will witness the convening of the Joint Economic Commission after 9 years, including the signing of several agreements and bilateral memorandums of understanding.

The Ambassador of Egypt invited the attendees to continue celebrating the National Day in the framework of the activities of the Second Cultural Month of Egypt throughout July in the four corners of Serbia. . It features artistic and intellectual events alike.

EMBASSY OF THE REPUBLIC OF INDIA National Days: January 26th - Republic Day Republic Day honors the date on which the Constitution of India came into force on

Republic Day honors the date on which the Constitution of India came into force on 26 January 1950 replacing the Government of India Act (1935) as the governing document of India.[1]

The Constitution was adopted by the India Constituent Assembly on 26 November 1949, and came into effect on 26 January 1950 with a democratic government system, completing the country’s transition toward becoming an independent republic. 26 January was selected for this purpose because it was this day in 1930 when the Declaration of Indian Independence (Purna Swaraj) was proclaimed by the Indian National Congress.

It is one of three national holidays in India, the other two being Independence Day and Gandhi Jayanti.

Australia Day is the official National Day of Australia. Celebrated annually on 26 January, it marks the anniversary of the 1788 arrival of the

Australia Day is the official National Day of Australia. Celebrated annually on 26 January, it marks the anniversary of the 1788 arrival of the First Fleet of British Ships at Port Jackson, New South Wales, and the raising of the Flag of Great Britain at that site by Governor Arthur Phillip. In present-day Australia, celebrations reflect the diverse society and landscape of the nation, and are marked by community and family events, reflections on Australian history, official community awards, and citizenship ceremonies welcoming new immigrants into the Australian community.[2]

The meaning and significance of Australia Day has evolved over time. Unofficially, or historically, the date has also been variously named “Anniversary Day”, “Invasion Day”, “Foundation Day”, and “ANA Day”.[3] 26 January 1788 marked the proclamation of British sovereignty over the eastern seaboard of Australia (then known as New Holland).[4] Although it was not known as Australia Day until over a century later, records of celebrations on 26 January date back to 1808, with the first official celebration of the formation of New South Wales held in 1818.[5] On New Year’s Day 1901, the British colonies of Australia formed a Federation, marking the birth of modern Australia. A national day of unity and celebration was looked for. It was not until 1935 that all Australian states and territories had adopted use of the term “Australia Day” to mark the date, and not until 1994 that the date was consistently marked by a public holiday on that day by all states and territories.[6]

In contemporary Australia, the holiday is marked by the presentation of the Australian of the Year Awards on Australia Day Eve, announcement of the Australia Day Honours list and addresses from the Governor-General and Prime Minister. It is an official public holiday in every state and territory of Australia, unless it falls on a weekend in which case the following Monday becomes a public holiday instead. With community festivals, concerts and citizenship ceremonies, the day is celebrated in large and small communities and cities around the nation. Australia Day has become the biggest annual civic event in Australia.[5]

Saint Sava (Serbian: Свети Сава/Sveti Sava, pronounced [sʋɛ̂ːtiː sǎːʋa], 1174 – 14 January 1236), known as the Illuminator, was a Serbian prince and Orthodox monk, the first Archbishop of the autocephalous Serbian Church, the founder of Serbian law, and a diplomat. Sava, born Rastko, was the youngest son of Serbian Grand Prince Stefan Nemanja (founder of the Nemanjić dynasty), and ruled the appanage of Hum briefly in 1190–92. He then left for Mount Athos where he became a monk, with the name Sava (Sabbas). At Athos, he established the monastery of Hilandar, which became one of the most important cultural and religious centres of the Serbian people. In 1219 he was recognized as the first Serbian Archbishop by the Patriarchate, and in the same year he authored the oldest known constitution of Serbia, Zakonopravilo, thus securing full independence; both religious and political. Sava is regarded the founder of Serbian medieval literature.

He is widely considered as one of the most important figures of Serbian history. Saint Sava is canonized and venerated by the Serbian Orthodox Church, as its founder, on January 27 [O.S. January 14]. His life has been interpreted in many artistic works from the Middle Ages to modern times. He is the patron saint of Serbia, Serbs, and Serbian education. The Church of Saint Sava in Belgrade is dedicated to him, built where the Ottomans burnt his remains in 1594 during an uprising in which the Serbs used icons of Sava as their war flags; the church is one of the largest church buildings in the world.