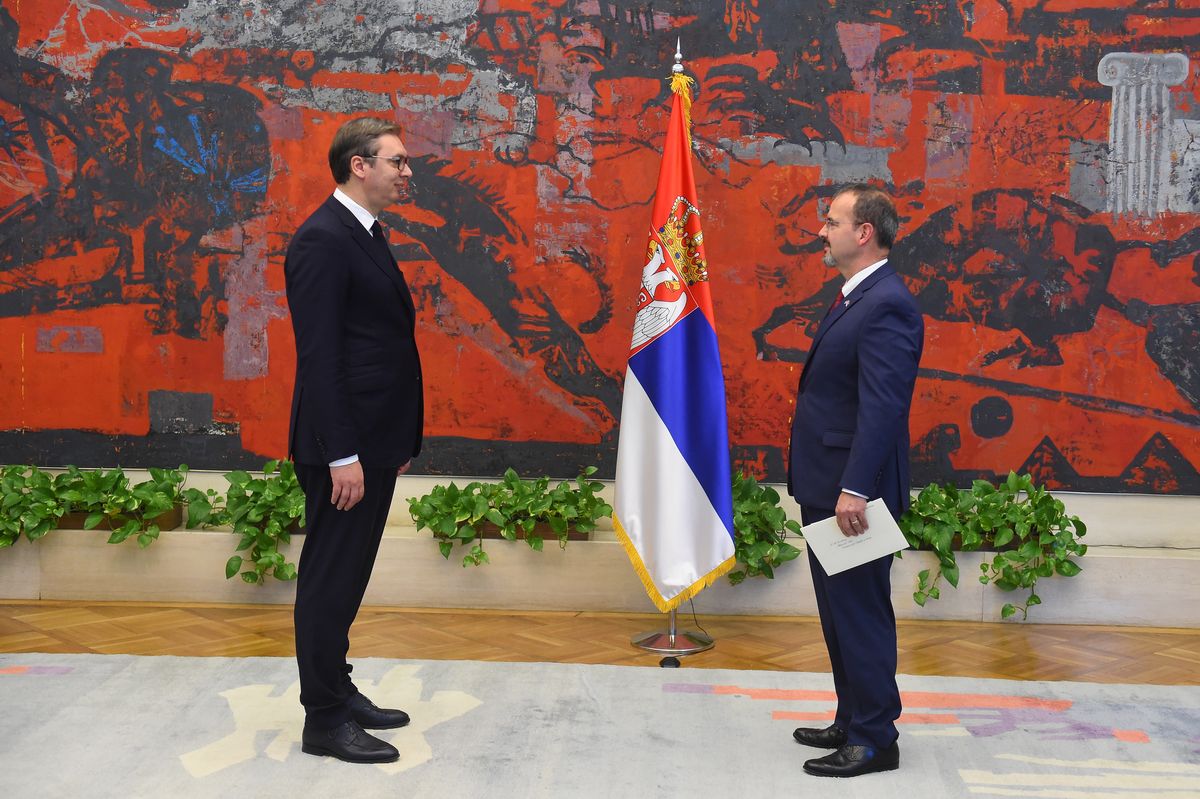 President of the Republic of Serbia Aleksandar Vučić wished a welcome to the new Ambassador of the United States of America Anthony Godfrey and expressed his hope that it is the mutual wish that the relations of the two countries return to the level of true partnership as they used to be and as they should be and that in the future we will be reminding ourselves more of what connects us.

When presenting his Letter of Credence, Ambassador Godfrey said in the Serbian language that on behalf of President Trump, Secretary of State Mike Pompeo and the people of the United States of America, he conveys to the President and all the citizens of Serbia the best of wishes. „The United States of America appreciate very much the friendship and the personal ties we have been building up for over one century and which connect our two nations. As the Ambassador, I will be committed to the cooperation with you and with the Government of Serbia to support Serbia in attaining its objective of European integrations. We share your belief that Serbia has the potential to serve as the example of prosperity and peace in this region”, said the new US Ambassador.

President Vučić said that the political dialogue between Serbia and the USA has been intensified and that the interest of American investors for the Serbian market has become more evident.

Ambassador Godfrey said that President Vučić and Serbia can be proud of the achieved economic progress confirmed by the international financial institutions. He said that the USA wish to support this economic progress as well as the regional cooperation and better relations in the Western Balkans.

President Vučić said he appreciates the support of the USA to the European path of Serbia especially through their assistance in the implementation of the necessary reforms. He pointed out that Serbia remains firm on the European path, but that at the same time it remains an independent country and autonomous in decision making.

The two interlocutors agreed that the appointment of special envoys – Ambassador Richard Grenell and Deputy Assistant Secretary Matthew Palmer – outlines the wish of the USA to support the dialogue between Belgrade and Priština. Although there is no current progress in the dialogue, President Vučić said he would be pleased with the opportunity to exchange opinions with both special envoys and added that we appreciate the support in finding a compromise, mutually acceptable and sustainable solution.

As U.S. Ambassador, Anthony F. Godfrey leads the U.S. Government’s efforts to advance its partnership with Serbia, expand economic prosperity, and assist Serbia’s efforts for European integration.  It is in the strategic interest of the United States that Serbia develops as a modern, democratic, and prosperous European nation that is at peace with its neighbors and demonstrates full respect for the rule of law and rights of its citizens.  Helping our Serbian partners to strengthen their democratic institutions, protect the rights of members of minority communities, combat corruption, and improve media freedom are key areas for Ambassador Godfrey and his team.  Supporting Serbia’s goal of EU membership and regional stability by promoting the normalization of relations between Pristina and Belgrade is a top priority for Ambassador Godfrey.

Ambassador Godfrey, a career member of the Senior Foreign Service, class of Minister Counselor, arrived in Serbia on October 23.  He served from 2015 to 2019 as Political Minister Counselor, and then Deputy Chief of Mission, at U.S. Embassy Moscow, Russia.  He was Director of Iraq Affairs in the Bureau of Near Eastern Affairs at the Department of State 2013-2015, and Political Minister Counselor at the U.S. Embassy in Baghdad 2012-2013.  During almost 40 years of service in the U.S. Navy and the Foreign Service, Ambassador Godfrey has become expert in central and southern European affairs.

Ambassador Godfrey was Director for Turkey and Eurasian Energy at the National Security Council, 2011-2012, and Political-Military Affairs Counselor at the U.S. Embassy in Ankara, Turkey, 2008-2011.  He was Deputy Chief of Mission at U.S. Embassy Yerevan, Armenia, 2004-2007, and Political Officer at U.S. Embassy Zagreb, Croatia, 2001-2004.  He was International Affairs Officer in the Office of Russian Affairs, Bureau of European and Eurasian affairs, 1998-2000, and Deputy Head of Group, OSCE Assistance Group, in Chechnya, Grozny, Russia, 1996-1997.  His U.S. Navy service, 1980-1992, included tours in Turkey and Japan, and he studied Russian at the Defense Language Institute in Monterey, California.  His final military assignment was four years with the On-Site Inspection Agency, working to verify Soviet implementation of arms control agreements.

Ambassador Godfrey earned a B.A. with Highest Honors at the University of California at Davis.  His numerous awards include the 2018 James A. Baker III DCM of the Year Award.  He speaks Russian, Serbo-Croatian and Turkish.

Mr. Godfrey is married to the former Anne O’Toole, whom he met while posted in Dublin.  They have three children, ages 27, 19, and 18.