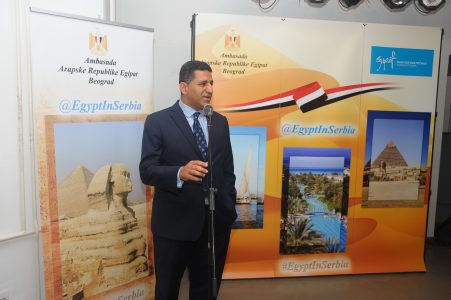 The Embassy of the Arab Republic of Egypt in Belgrade, hosted on July 29th, 2019 the Opening Reception of the “Arabic Calligraphy Exhibition: The Egyptian Collection” organized in cooperation with the Arabic Cultural Centre at UK GO STARI GRAD. The reception was attended by a large number of Ambassadors accredited in Belgrade, as well as lead Serbian politicians, parliamentarians, as well as renowned figures in the cultural, media and business circles.

Ambassador of Egypt In Belgrade Amr Aljowaily highlighted in his opening remarks that the exhibition comes to culminate the Second Month Of Egyptian Culture held throughout July, to mark 111 years of the establishment of diplomatic relations between Egypt and Serbia, as well as the National Day of Egypt commemorating the July 23rd Revolution of 1952. “Arabic Calligraphy: The Egyptian Collection is a reflection of the simultaneous beauty of both content and form, substance and appearance given that the art of calligraphy is used to visualize verses of wisdom”, said Aljowaily, commending the high interest of Serbian youth in learning Arabic as demonstrated by the large number of students of the Arabic Section of the Faculty of Philology of University of Belgrade.

For her part, President of the Arabic Cultural Center Ena Pavlovic explained that the exhibition takes place from July 29th to August 5th, Monday to Friday, 9 a.m. to 5 p.m. She added that during the exhibition, there will be a calligraphy workshop organized, as well as a lecture on Egyptian art and a film projection. Pavlovic reviewed the role of the Center in bringing closer Arabic and Serbian culture, highlighted that the Exhibition is one of several activities organized with the Embassy, given the central role of Egypt’s contribution to literature, cinema, and music in the Arab World. Tijana Stojic, a young Serbian musician, performed the classic Egyptian song “Enta Omry or Your are my Life’ for the legendary Egyptian singer Om Khalthoum, on guitar for the first time, knowing that the melody is typically performed by oriental instruments, namely “Oud” (precursor to guitar) and the “Qanoun” (precursor to zither instrument).

Israel and its Image After the 1967 War

Exhibition on Women in Mathematics at Kalemegdan