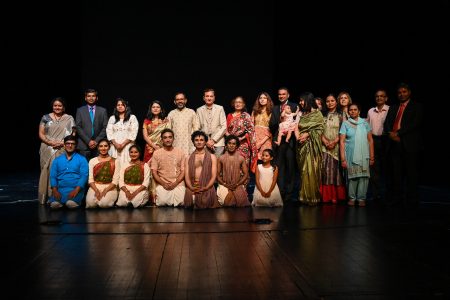 In commemoration of 150th Birth Anniversary of Mahatma Gandhi, the Embassy of India, Belgrade in association with the Indian Council for Cultural Relations (ICCR) organized a Bharatanatyam (a classical dance of India) Dance performance on August 5, 2019 at the Opera & Theatre Madlenianum.

The dance performance entitled “Gandhi”, by a 9-member group was led by renowned Indian classical dancer Mr. Satyajit Dhananjayan, Head of Bharat Kalanjali. ‘Gandhi’ is a Bharat kalanjanlii production depicting the phenomenon Gandhi, conceptualized and created by Satyajit Dhananjayan himself. It is an innovation that explores the social and political philosophy of Mahatma Gandhi through a non-linear narrative, the performance looks at the crux of Gandhi’s ideology – looking into oneself to find the truth. The production is an unbiased, neutral and truthful depiction of Gandhi that intrigues you to start the journey of discovery of your mind, body and soul. Without politicizing or sanctifying Gandhi, the performance chronicles Gandhi’s everyday life, from his time to the present. The dance steps have been put in a way to enable us to understand Gandhi’s way of life and help to choose elements that would translate unto the stage through visualizations. The deep yet serene portrayal is enhanced and complemented by the music and simple yet beautiful costumes adding to the strength in the movements.

Serbian Government officials, cultural and media personalities, friends of India, members of the Indian community and dance lover people of Serbia were present in large numbers.