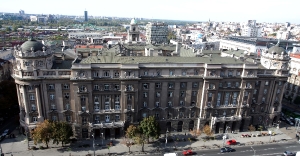 They centred attention on the achieved development of Serbia-NATO PfP cooperation and further steps within their PfP cooperation, with the aim of promoting regional stability and security.

Ambassador Stamatopoulos expressed his highly positive views on the achievements of the partner cooperation, reiterating his high assessment of Secretary General Stoltenberg’s visit to Belgrade and its results.

Ambassador Filipovic had a separate meeting with the Assistant Secretary General for Emerging Security Challenges, Ambassador Sorin Ducaru, during which they examined Serbia’s further participation in the Science for Peace and Security Programme that proved to be very useful for our research and other institutions. Ambassador Filipovic also had talks with representatives of the Sector for Operations, Sector for Investments, and Sector for Public Diplomacy, who spoke positively of cooperation with KFOR in the field, while the Serbian side expressed concern for the safety of the Serbian population and cultural and religious heritage sites in Kosovo.