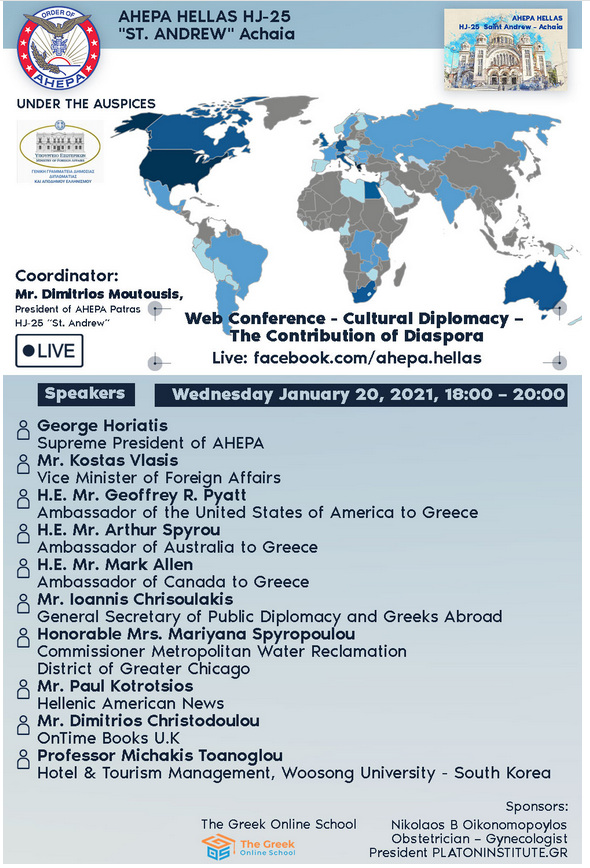 The contribution of the Hellenic Diaspora in the forging of bilateral cultural relations between Greece and third countries is the key issue of the web conference “Cultural Diplomacy – The Role of Diaspora” organized by AHEPA Patras HJ-25 “St. Andrew”. The online event will take place on Wednesday, January 20, 2021, from 18:00 to 20:00 (Greek time).

A panel of prominent speakers from Greece and abroad will discuss Cultural Diplomacy and the role of the Hellenes abroad as well as cultural initiatives that aim to build strong bonds among citizens of different origin.

The speakers of the event are in order of appearance:

The discussion will be coordinated by Mr. Dimitrios Moutousis, President of AHEPA Patras HJ-25 “St. Andrew”.

The web conference will be broadcasted on the AHEPA HELLAS Facebook page: www.facebook.com/ahepa.hellas

Thanks for reading Hellenic News of America
Subscribe to HNA