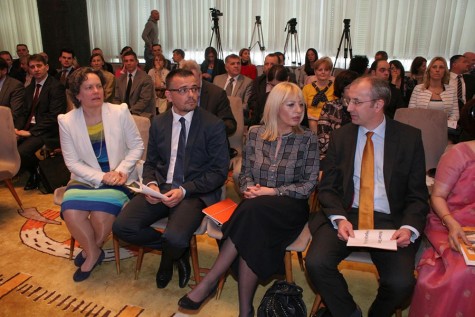 Serbian Government Vice-President/Minister of Public Administration and Local Self-Government Kori Udovicki and several ambassadors, today signed the Declaration aimed to support professional training of civil servants in Serbia, through training in the country and abroad.

Head of EU Delegation to Serbia Michael Davenport said he believed future Government would continue to implement reforms with the same will and intensity as the current Government has. He said the EU would continue to be committed to supporting Serbia in the process of improving public administration.

Serbia, as he put it, is getting closer to signing final agreements within IPA for the first sectoral budgetary support programme, aimed particularly at public administration reform and management of public finance.

“It is important for Serbia to work on improving the capacity of public administration, not only at the state, but also at the local level, and to continue to train civil servants,” Davenport said and added it was important to establish a merit-based system of rewarding civil servants, and make their salaries transparent.

According to him, in cooperation with Council of Europe, Serbia will launch a new project in April, aimed at designing a new plan for the training of civil servants.

“That is why the EU, still drawing lessons from its past, is paying particular  attention to public administration reform,” Davenport said.

The document was signed at the first diplomatic forum held at Palace of Serbia, organised by Ministry of Public Administration and Local Self-Government and National Alliance for Local Economic Development (NALED).

“Building the desired civil servants system is one of the four pillars of public administration reform. There is a need to step up training of public servants and to design more holistic programmes which would consistently help civil servants to change the way they do their jobs,” Udovicki said.

She said that in 2015, nearly 2,000 civil servants underwent 118 trainings, but added that the scope of those trainings was insufficient.

Vice-President of NALED Steering Committee/Mayor of Sremska Mitrovica Branislav Nedimovic said the initiative to organise diplomatic forum and sign the Declaration was a result of the need to organise further training and provide technical support to public administration.

Following the first diplomatic forum, the Ministry and NALED will, with the support from embassies, publish the first ever guide to international training for civil servants, in order to bring civil servants closer to these programmes and help them to apply their knowledge in everyday work and planning.