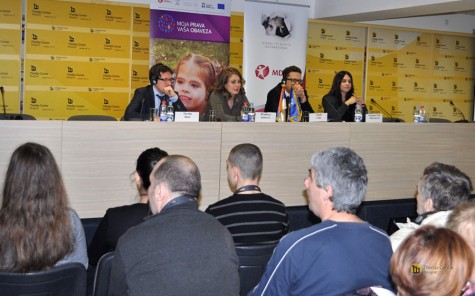 At the presentation of these results, Nicolas Bizel of the EU Delegation to Serbia and Advisor to UN Resident Coordinator in Serbia Claude Cahn said it was necessary to make education accessible to all, and include persons with disabilities into each and every segment of the society.

Analysis shows there are considerable differences among institutions when it comes to inclusion of children in education system. According to survey, in three out of four institutions, 18 per cent of children attend school, that is 29 out of 159 children.

Situation in small residential communities, accounting for 10-13 residents, is a bit different because enrolling children in school was one of the obligations within the project aimed at transformation of child institutions, implemented from 2008-2010.

Director of Initiative for the rights of persons with disabilities Dragana Ciric Milovanovic said monitoring of social protection institutions showed that a large number of children with disabilities was excluded from education system.

Commissioner for the protection of equality Brankica Jankovic said that regardless of the fact that Serbia had relevant legal framework, offering adequate protection, in reality there are numerous issues, leading to making discretionary decisions in municipalities. As an example, she cited the poor definition of persons bearing the costs of companion service, that is the service offering support for full engagement of children in education system.

Speaking about complaints referred to Commissioner’s service, Brankica Jankovic said they mostly concerned the failure of the Ministry of Education to provide children with disabilities with pedagogical assistants.

As pointed out, goal of the conference was to contribute to equality of children with disabilities in residential care within the education system and consider additional measures to improve public policy and practice in the process of deinstitutionalisation and the implementation of inclusive education.