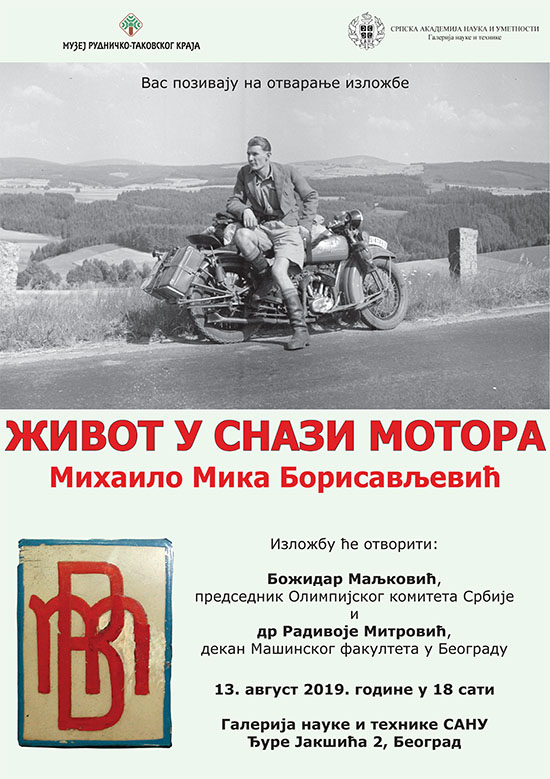 An exhibition entitled ‘Life in the Engine Power: Mihailo Mika Borisavljević’ is set to open at the SASA Gallery of Science and Technology, on Tuesday, 13 August, at 6 p.m. The Vice President of the Olympic Committee of Serbia, Žarko Zečević and Professor Radivoje Mitrović, Dean of the Faculty of Mechanical Engineering will deliver speeches at the opening ceremony.

The exhibition illustrates the life and work of Mihailo Borisavljević, a professor of the Faculty of Mechanical Engineering in Belgrade and world-renowned expert in the field of motor and automobile industry. Based on his own drawings, he designed the first Serbian racing motorcycle MB-125, and together with professor S. Dobrosavljević, he designed ‘Krušik’s’ auxiliary motor for MO-1 bicycle in the SASA Institute of Mechanical Engineering, which will be on display.

He was a participant of numerous motor races, and an honorary Olympic Attaché at the Games held in 1936 in Germany. He was one of the founders of the Automobile and Motorcycle Association of Yugoslavia, the Association of Motorsport Historians founded in 2001 in Belgrade, as well as the Yugoslav Association of Motors and Cars, being their honorary member. He was also a member of the Technical Commission of the International Motorcycling Federation (FIM) and a delegate in the International Automobile Federation (FIA), as well as a panel member at numerous important, international races.

The exhibition lasts until 28 August, and the organizers are the Museum of Rudnik and Takovo Region, Gornji Milanovac and the SASA Gallery of Science and Technology.