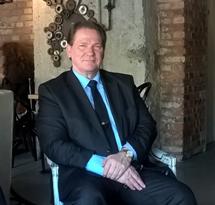 Finnish transport expert Mr Juha Piironen is one of the few Finns living in Serbia. He is a leader of a Twinning project aimed at improving the transport sector in Serbia. We had a nice opportunity to talk to Juha about the project and his impressions of Serbia.

What is the purpose of the twinning project you have been working on?

The two-year project, worth € 1,75 million, was launched in 2015. It covers all types of transport, which is a winning combination in this sector. A project mission is to increase capacities within national institutions and to improve compliance with the EU legislation. Also, one project component is aimed at creating a safety management system within the Serbian Railways.

It is important to mention that this project is jointly implemented by three EU member states – France, Lithuania and Finland. The three countries have a long-lasting twinning cooperation in transportation sector which started in 2005 in Lithuania, and has continued in Egypt, Bulgaria and Serbia. This gives us a great opportunity to offer the best practices that have been tested many times and in different places.

In general Finnish authorities have taken part in over 170 EU funded Twinning projects since Finland became an EU member.

What is the best way to transfer expertise?

I believe study visits are among the best tools for passing the know-how. That is why we are going to organize two study visits to Finland this year, in June and September. Finland has a high-developed railway technology and we are going to present it to our Serbian partners.

How is Serbia doing in the transport sector?

I can say that Serbia has been proceeding well in the transport sector. The EU Council has already given a green light for the opening of Chapter 14 related to transport, and we expect the same from the European Parliament in the following months. It is easily noticeable that the people here are eager to make progress and face challenges. We have an excellent cooperation with Serbian institutions, especially with the Ministry of Transport and Railway Directorate, our main partners.

What are the challenges for Serbia in terms of reaching the EU standards in transportation?

In Serbia there is a tendency to regulate some rather technical issues within laws, while in Finland we address them at a lower level. This means that the harmonization with the EU legislation sometimes lasts longer, because it takes time to amend laws. However, it does not present a major problem because civil servants in Serbia are very familiar with the EU acquis.

Do you enjoy living in Serbia?

Yes, I really do. I have been here on a permanent basis for one year now. Frankly speaking, when I came to Serbia for the first time, five years ago, I was quite positively surprised. In the nineties we used to hear mostly bad news about this region, and now things are really different. I like everyday life in Serbia and the people are very nice. Also, I enjoy delicious Serbian food, especially pršuta and lamb baked under sač, as well as great local red wines.

What about doing business in Serbia?

Serbia has great potentials that should be better promoted. I believe there are good business opportunities here, but companies from Finland, for example, do not know about them. I really hope soon we would have direct flights from Helsinki to Belgrade, since those kinds of things can truly boost cooperation between countries.