Within the project “Inclusion of Roma and Other Marginalised Groups in Serbia”, German Development Cooperation has lent support to towns and municipalities in combating further spread of coronavirus in Serbia by providing protective and IT equipment to crisis headquarters, call centres and other relevant local bodies.

The months-long pandemic of COVID-19 virus has disrupted both economy and life in general, and produced a need for setting up temporary bodies and expanding crisis headquarters to provide assistance to fellow citizens in their communities. In order to preserve public health, and following the invitation from the Cabinet of the Deputy Prime Minister of the Republic of Serbia and the Chairperson of the Coordination Body for Monitoring the Implementation of the Strategy for Social Inclusion of Roma, Prof Zorana Mihajlović, the Government of the Federal Republic of Germany has decided to aid Serbia with the donation of 1,950 of protective masks and 78 packages of protective gloves. The assistance is being delivered by the Deutsche Gesellschaft für Internationale Zusammenarbeit (GIZ) GmbH. 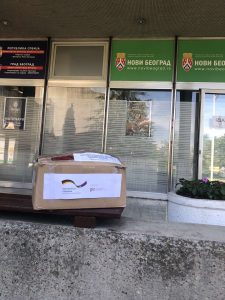 “Even though the state of emergency has been lifted, we are still facing a highly challenging period that calls for greater awareness of the importance of preserving public health and taking utmost care of health of all our employees. Serbian Government has adopted measures we all must adhere to, and we hence express our gratitude to the German Government and to GIZ for responding to the invitation extended by the Cabinet of the Deputy Prime Minister, as this donation will be of the utmost importance in further organising our work and work of municipalities and crisis headquarters”, Nenad Ivanišević, PhD, explained, Special Advisor to the Deputy Prime Minister, prof. Zorana Mihajlović, and Deputy Chairman of the Coordination Body for Monitoring the Implementation of the Strategy for Social Inclusion of Roma.

In addition to aiding in preserving the public health by delivering medical protective equipment, and helping crisis headquarters act preventively, under the current project “Inclusion of Roma and Other Marginalised Groups in Serbia” GIZ has also managed to ensure support for improving the services provided by local self-governments by donating 12 laptop computers and 7 printers.

“One of the main areas of cooperation between Germany and Serbia, where mutual support during the crisis was particularly visible, is in assistance to the population at risk, marginalised groups and those who need the support the most. The Government of the Federal Republic of Germany and GIZ have recognised the existing needs of many municipalities and towns in Serbia and have used this donation as their contribution to help them overcome the crisis by endeavouring to provide the best working conditions for all crisis headquarters and municipalities in Serbia. By doing so, they will be ready to support their local communities, and particularly marginalised social groups that have been hit the hardest with the current situation, from both health and economic standpoint”, Aleksandra Dimić-Ugrinaj, Project Leader for “Inclusion of Roma and Other Marginalised Groups in Serbia”, explained.

The post Germany supports Towns and Municipalities by Donating Protective and IT Equipment appeared first on Nemačka saradnja u Srbiji.