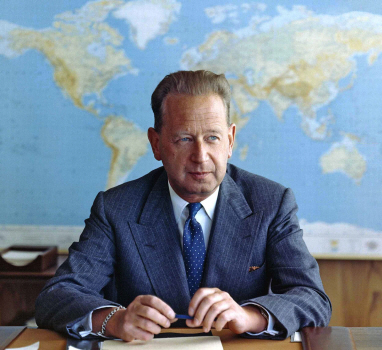 This is just one of many classic Dag Hammarskjöld quotes.

Dag Hammarskjöld was a world citizen. During his period as Secretary-General of the United Nations, from 1953 until his death in 1961, he became known as an efficient and dedicated international civil servant.

Today, more than 50 years after his death, Dag Hammarskjöld serves as a role model for many international workers, especially civil servants.

Dag Hammarskjöld emphasised that a major task of the UN is to assert the interests of small countries in relation to the major powers. He also was among the architects of the UN’s peacekeeping forces. Hammarskjöld was widely respected as a person of utmost integrity, who acted on the basis of moral and ethical values.

Before he was appointed UN Secretary-General, Dag Hammarskjöld held high positions as a civil servant in the Swedish Government. He had a close connection to Sweden’s natural environment and traditions, while also being well acquainted with a variety of the world’s religions. Hammarskjöld also had wide cultural interests and was a member of the Swedish Academy.

On the night of 17−18 September 1961, in the course of a UN mission to try to bring peace to the Congo, Hammarskjöld’s plane crashed near Ndola airport in the British protectorate of Northern Rhodesia (now Zambia). All 16 passengers and crew died.

In late 1961, Dag Hammarskjöld was posthumously awarded the Nobel Peace Prize for his efforts “to create peace and goodwill among nations and men”.

At the end of March 2016, UN Secretary-General Ban Ki-moon came to Stockholm to hold the annual lecture in memory of Dag Hammarskjöld. These are some of his words:

“Our shared challenge is to shape this new world for the better − to build a landscape of opportunity and peace, while conquering persistent injustices, from hatred to hunger. Around the world, we are being tested in old ways that Hammarskjöld would have recognised − and in new ways for which his example can remain our guide: massive displacement – the most since the Second World War; terrorism; atrocious crimes that defy all norms of humanity.

Not only Ban Ki-moon finds inspiration in the work of Dag Hammarskjöld. Over the years, numerous Swedish diplomats and politicians, such as Agda Rössel, Alva Myrdal, Olof Palme, Jan Eliasson, Hans Blix, Rolf Ekéus, Anna Lindh, Carl Bildt and Margot Wallström, have continued on his path.