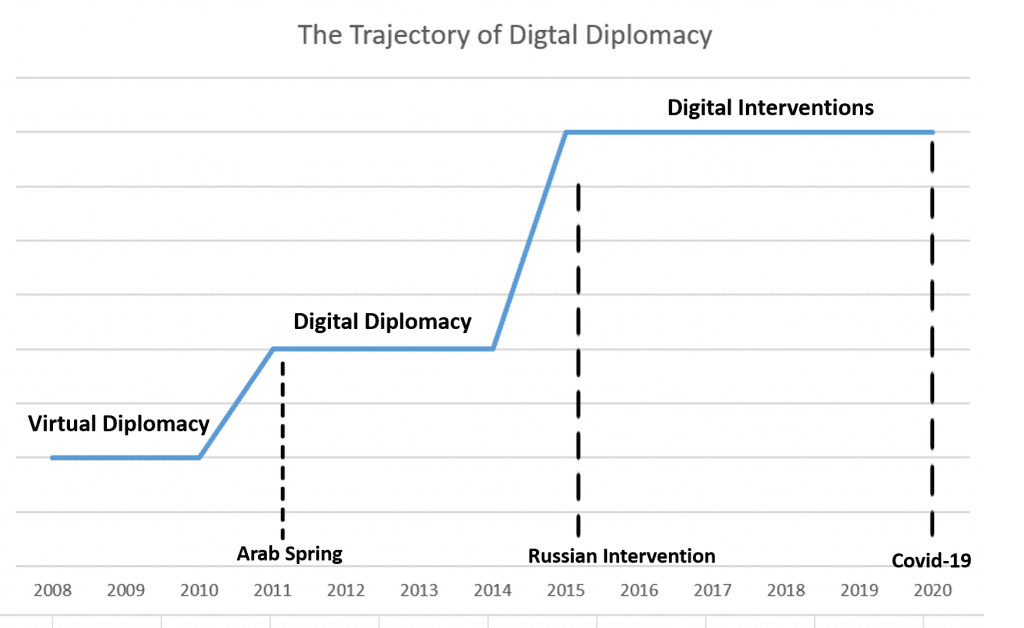 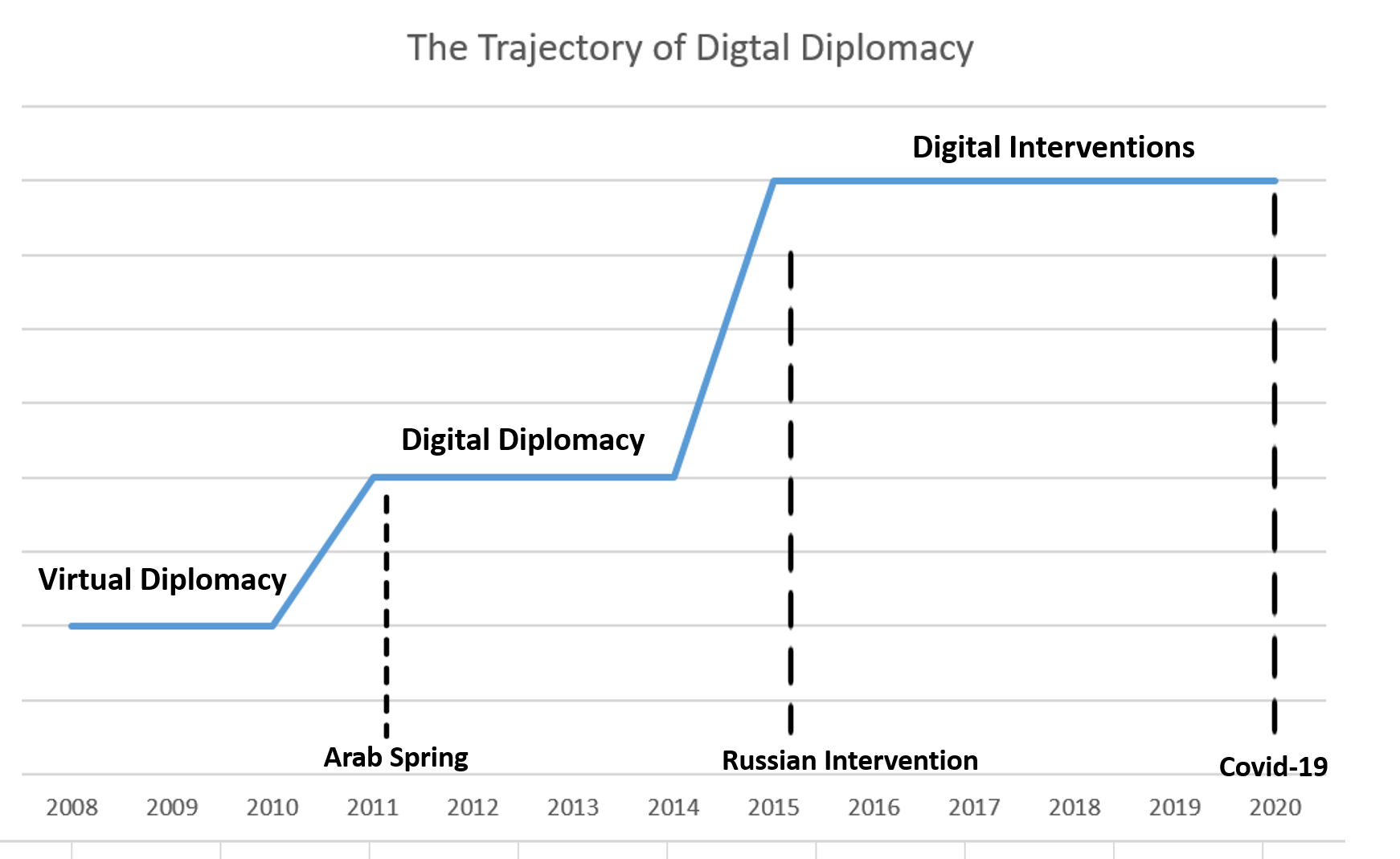 Some academics believe that digital diplomacy has developed in a linear fashion, and that each technological breakthrough (e.g., Facebook, AI) is accompanied by a process of implementation, adaptation and assimilation. Such scholars tend to focus on the attributes of any new technology while uncovering its potential use for diplomats. The fax machine, for instance, reduce the need for diplomatic pouches as diplomats could reach their peers within minutes. Similarly, email dramatically altered internal communications within MFAs.

Proponents of a technological prism also regard digitalization as an evolutionary process. Friendster led to Facebook which led to Twitter. The iPod replaced the mp3 player while the DVD replaced the video. The ‘evolutionary process’ of digitalization is cognitive, affective and behavioral. Cognitively, technologies such as social media have altered our perception of life as distance loses meaning, and separation is never complete. One can still Facebook a friend who moved to another country, and in real-time.

Affectively, social media offer a sense of validation and worth. One no longer needs to worry about being popular. S/he need only check their rate of Likes and Shares. Of course in such a world, there is no room for originality. All users copy the acts of their ‘influential’ friends. As such, the behavioral impact of Facebook lies not in people sharing personal abuse but in creating a global populace of drones.

Advocates of a technological prism would argue that any technology can be used for good or bad and that digital tools have augmented diplomats’ ability to reach foreign publics, influence foreign news coverage, stimulate ideas, promote exchange programs and converse with global publics. From Facebook to Twitter, Instagram, TikTok, WhatsApp to YouTube, all digital technologies have propelled diplomas higher, while increasing their reach and influence.

I, for one, am a proponent of the societal prism which investigates how societal changes lead to new technologies. Moreover, I believe that one can only understand technology if s/he first understands society. The reason being that global or regional developments impact which technology people use and to what end. Looking back on the past decade, I believe that two events have shaped the trajectory of digital diplomacy.

In 2008 Sweden launched the world’s first virtual Embassy on the world of Second Life. Virtual visitors could attend Swedish art galleries, attend literary festivals and hear book readings. That same year, an Israeli NGO published the virtual game of Peacemaker in which Israeli players take on the role of Palestine’s president and vice versa. Soon after that, the US launched its own virtual Embassy to Iran. The examples demonstrate that during the first wave of digitalization, diplomats sought to copy diplomatic functions online. This was not digital diplomacy, but simply diplomacy in virtual settings.

Then came an external shock to the system- the Arab Spring. Diplomats the world over were stunned by the intensity of these revolts and the speed with which dictators were toppled. The failure to anticipate ‘Arab Springs’ led diplomats reevaluate digital technologies. Some found that social media offers a breadth of information regarding the politics of foreign nations. Others wanted just to listen to global publics while the most daring decided to use social media as to converse with foreign populations.

2011-2015 was thus a period of experimentations as diplomats learned the codes of digital conduct. Throughout this period numerous MFAs held digital diplomacy seminars, camps and conferences all eager to share best practices. Notably, during these years, diplomats viewed social media as positive tools that can help shape local and global activities. Then came the second external shock- Russia’s takeover of Crimea and its possible interference in the US Elections and Brexit.

Soon, the rhetoric of diplomats changed. Social media were dangerous. Users could be sucked into echo chambers of violence and extremism. Outside actors may operate armies of Bots and fake accounts so as to weaken another government. Words such as post-truth, digital resilience and disinformation soon came to dominate diplomatic conferences as all were weary of digital interventions.

2015-2019 saw an emphasis on the ‘dark side’ of digital diplomacy with many governments creating monitoring units or Big Data units charged with finding and fighting digital manipulations. Some MFAs also adopted a narrative approach to their online content. Theses narratives were used to compete over the attention and support of digital publics. When Russia argued it had not killed civilians in Syria, the UK posted images indicating otherwise. And when NATO published images of Russian tanks in Ukraine, Russian diplomats mocked these by taking pictures of toy tanks.

Now, we are witnessing a third external shock that will surly lead to changes in digital diplomacy. When the dust settles we may expect three outcomes. First, Big Data will serve as proof. Any diplomat seeking a digital budget will be asked for a Big Data projection (current online reach, potential online reach). As in the 80’s, diplomats will have to demonstrate their efficacy numerically as government are enamored with Big Data projections (number of hospital beds, number of deaths).

Second, MFAs may develop their own algorithmic models. Such models could be used to predict a pandemic and identify areas most likely, and least likely to be hit. In this way, diplomats can best focus their efforts. Finally, it is possible that MFAs and health ministries will develop shared digital tools. Equally important, MFAS and health ministries may conduct online simulation to tests their readiness for the next Covid.