The still ongoing pandemic-caused crisis that has exerted enormous pressure on public finance, was also the driver of an energy crisis and inflation growth brought about by higher energy and food prices. The world is now faced with one more crisis initiated by the war in Ukraine. Due to its unpredictability, the new crisis is a particular threat to macroeconomic stability. Same as other countries, Serbia will need to make difficult decisions about how to curb inflation and at the same time help the economy and population in such circumstances.

In the short run, the winners are those who currently have the resources every economy needs the most, but in the long run, the winners are those who hold knowledge, and innovation and are able to produce value-added. Serbian economy, observed in the long-term, needs a new model of economic growth based on the principles of green transition and digitalization, given that only those who have such knowledge will survive in this new environment. This is why it is important for the local companies to recognize this opportunity, as stated in the conclusions at the conference “How resilient is the Serbian economy towards global crises and challenges?”. 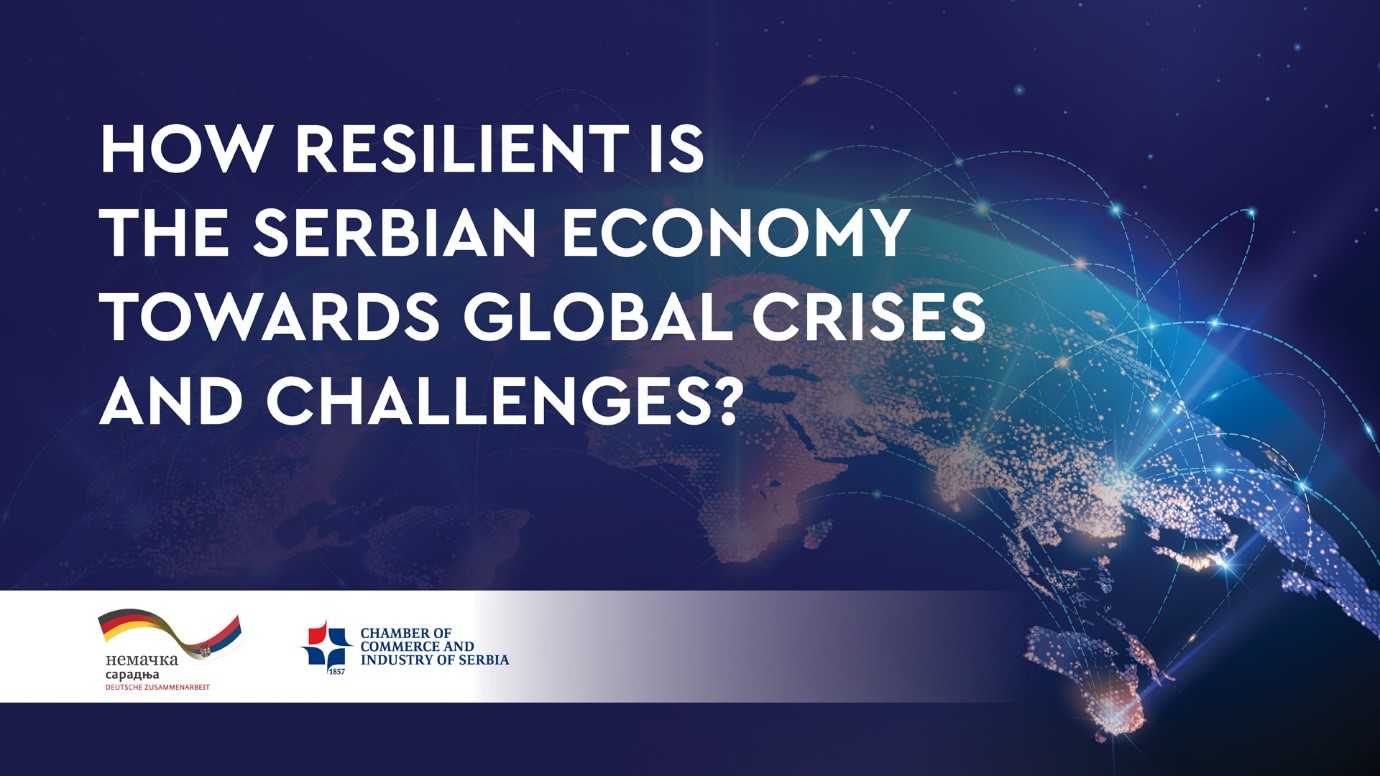 The Embassy of the Federal Republic of Germany and the German-Serbian Initiative for Sustainable Growth and Employment organised a conference in Belgrade on 18 May entitled “How resilient is the Serbian economy towards global crises and challenges?” in cooperation with the Serbian Chamber of Commerce and Industry. Keynotes were delivered by Marko Čadež, president of the Serbian Chamber of Commerce and Industry (PKS), Thomas Schieb, German Ambassador to Serbia, and Siniša Mali, Minister of Finance in the Serbian Government.

The highest-level officials have agreed that the higher energy and food prices stimulating inflation growth, disruptions in supply, hints about the new recession and unpredictability of further consequences emerging due to the war in Ukraine pose a threat to macroeconomic stability and create difficulties for the economies of Serbia and Germany. Therefore, priority tasks pertain to the diversification of oil and gas sources and the continued development of renewable energy sources. It is also required to work on greater diversification of supply chains, and the governments hold a particular responsibility to pass measures to curb the inflation and at the same time assist the economy and population in coping with the new crisis.

It was also emphasised at the conference that Germany was the leading investor in Serbia with 3 billion Euros worth of investments, and 125.000 people working in companies involving German capital and associated companies. Serbia is explicitly focused on cooperation with the German economy, which is reflected in the data that even 65% of Serbian export goes to the EU, which is 17% more than to Russia. Companies doing business with the EU employ 950.000 people, with 70% of total foreign direct investments coming from the European Union. Thomas Schieb, German Ambassador to Serbia, confirmed on this occasion that the Western Balkans integration with the European Union will remain a priority of German foreign policy and that German companies will continue investing in long-term projects in Serbia.

Serbia can be resilient to the crises such as the current one, but only under certain conditions, as shown by the analyses presented by Mario Holzner, executive director of the Vienna Institute for International Economic Studies and Radojka Nikolić, economic journalist and editor-in-chief of the Econometer and Business Magazine.

Serbia relatively well navigated through the pandemic, primarily due to the structure of its economy which is not dominated by the most vulnerable sectors, with agriculture and IT industry being the most resilient. The mitigation of consequences was significantly facilitated by the assistance packages amounting to more than 18% of GDP, which increased the public debt by 6 billion Euros. This year’s indicators suggest that the global crisis is being spilt over onto Serbia, while the major threats to further development are the low growth and slow integration with the EU, which would additionally increase lagging behind the EU economy.

Serbia is a good candidate for attracting new investors who wish to diversify and shorten their supply chains, primarily because of its good ranking in the region as regards the availability of labour force, especially when it comes to highly educated staff in the area of technical and natural sciences. It is up to the government to improve the quality of institutions and the rule of law and increase the predictability of the business climate, given that potential investors assigned a lower score to the administrative effectiveness in all Western Balkan countries.

A NEW GROWTH MODEL IS NEEDED

The national government representatives have confirmed at the conference that in parallel with the measures that ought to contribute to energy savings, Serbia is also working on diversification of supply in order to make it as stable as possible. The ongoing construction of the gas pipeline towards Bulgaria is implemented with the support of the European Investment Bank to reduce the dependence of the country on Russian gas, and at the same time, the gas storage capacities in “Banatski Dvor” are being extended.

The Ministry of Mining and Energy drafted the Decree on Socially Vulnerable Customers setting forth the reduced electricity bills for ca. 10.000 most vulnerable households and launched a scheme aimed at improving energy efficiency in households by subsidising replacement of joinery and installation of solar panels for own energy generation. The planned investments in these projects in the next few years range between 600 and 700 million Euros.

Serbia is also working on projects targeted at the substitution of coal by renewables in energy generation. The competent Ministry prepared 30 projects worth 13 billion Euros, with important implementing partners being the European Bank for Reconstruction and Development, World Bank and European Investment Bank.

Serbia has an opportunity to introduce a more innovative growth model based on the digitalization and green economy principles, the attending businessmen agreed. The domestic IT sector can be a good partner in this process, however, this industry, where 80% of the companies are engaged in outsourcing services for foreign clients, with only one-fifth developing their own products, needs to specialise in products with a high value-added.

Considerable support for faster digitalization is provided to the domestic economy, primarily to small and medium-sized enterprises, by the Serbian Chamber of Commerce and Industry Digital Transformation Hub. The Hub ensured grants from the Ministry of Economy amounting to 6.000 Euros, and services of licensed consultants. The research of the Serbian Chamber of Commerce and Industry has shown that companies involved in this programme have met 94% of their targets. The Serbian Chamber of Commerce and Industry is developing in parallel the activities of the Circular Economy Hub to improve energy efficiency in domestic companies, reduce waste in production and responsibly treat waste. The success of this concept calls for the implementation of education reforms aimed at educating experts in the area of green economy functioning in an entirely different way than the traditional one, representatives of this business association pointed out.

The post How resilient is the Serbian economy towards global crises and challenges? appeared first on Nemačka saradnja u Srbiji.