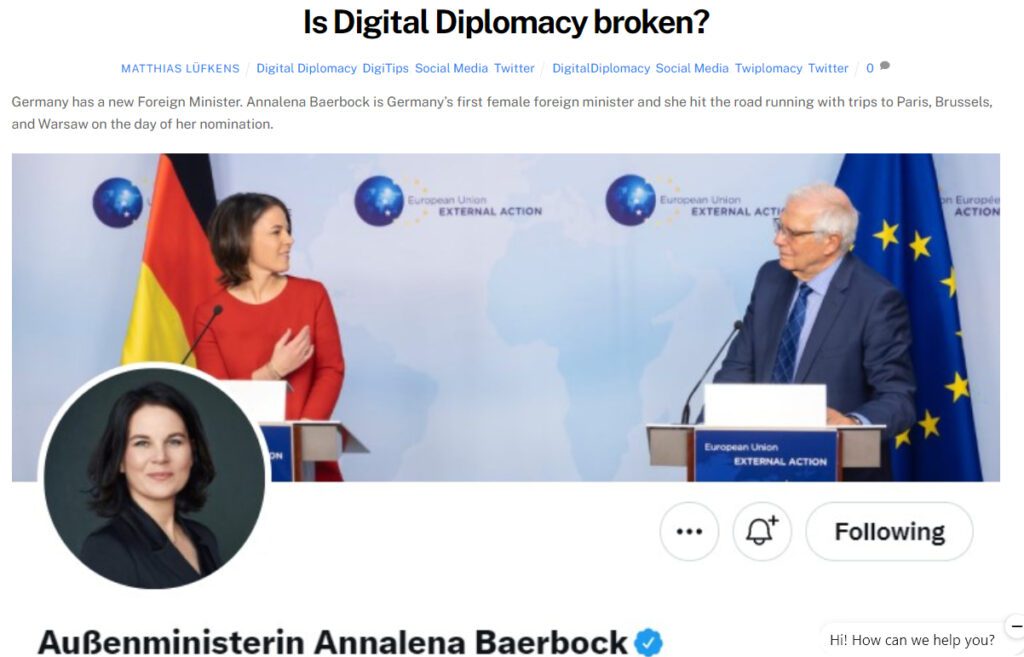 Germany has a new Foreign Minister. Annalena Baerbock is Germany’s first female foreign minister and she hit the road running with trips to Paris, Brussels, and Warsaw on the day of her nomination.

On social media she decided to start from a clean slate: archiving her personal Twitter account with 419,000 followers (@ABaerbockArchiv) and creating new @ABaerbock account for her new role as Foreign Minister. The new account is growing fast and already counts 80,000 followers barely a week after inception.

In line with digital diplomatic etiquette, she has made digital overtures, unilaterally following all G7 and many EU foreign ministers as well as the foreign ministers of Andorra, Australia, Israel and Norway on Twitter. In total she has extended a digital welcome to a group of 30 peers, mainly men with a few female foreign ministers.

Her first overtures on Twitter were for U.S. Secretary of State Antony Blinken, Josep Borrell Fontelles, the EU High Representative for Foreign Affairs and French Foreign Minister Jean-Yves Le Drian. Surprisingly or unsurprisingly, these three men have not reciprocated, despite having met physically with Annalena Baerbock in her first days in office. To put it into diplospeak not following her on Twitter is like refusing to shake hands, a clear case of a diplomatic affront.

Josep Borrell and Jean-Yves Le Drian would be well advised to have a closer look at who they follow. There might not be much point in following the archived accounts of former @SecPompeo and the @WhiteHouse45 nor the former foreign ministers @KonoTaromp @PavloKlimkin and @SigmarGabriel. It pays to keep on top of your followers and those you follow.

It is unlikely that Antony Blinken will ever reciprocate and follow @ABaerbock. Not because he doesn’t like Annalena Baerbock or Germany, but because he doesn’t follow any other peer. While @SecBlinken and the @StateDept promised to “revitalize our ties with our allies and partners” in early 2020, neither account follows any other foreign minister, foreign ministry, and not a single world leader, nor ally or international partner.

The State Department is the most followed foreign ministry with 6.2 million followers and over 200 world leaders and foreign ministries follow the @StateDept, but it does give all of them the cold shoulder or is it the middle finger? Not following friends and allies on social media is a digital diplomatic faux pas, considering that the State Department once followed some of its allies and foes and has unfollowed them under the Trump administration.

Whether it is digital sloppiness or diplomatic ignorance, it does spell the death knell of digital diplomacy as leaders are no longer interacting on social media as they once did.

Over the past decade world leaders have build armies of followers on Twitter. Nine of the 10 most followed current world leaders have more than 10 million followers on Twitter but they are not connecting with their peers. President Joe Biden, Pope Francis, Recep Tayyip Erdoğan, the President of India, Prime Minister Imran Khan, Sheikh Mohammed, Queen Rania of Jordan and King Salman of Saudi Arabia don’t follow any other users Twitter user. The Indonesian President Joko Widodo follows one other leader, namely Narendra Modi and Modi in turn does follow a host of other leaders, and tellingly he doesn’t follow Joe Biden.

For the record, Bulgaria’s new Foreign Minister Teodora Genchovska joined Twitter this week. So far she is only followed by her counterparts from Austria, Latvia, Romania and Slovenia and her account isn’t verified yet.

The post Is Digital Diplomacy broken? appeared on BIDD.