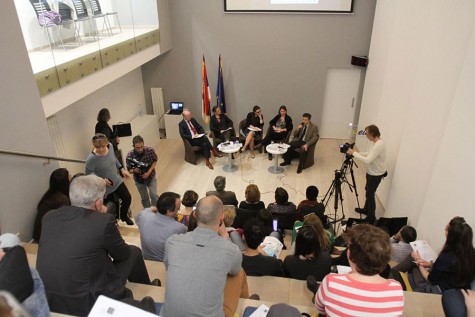 Serbian Government should decrease the level of subsidies, which are now three times higher than in the EU, and set ambitious goals to decrease the deficit, said Head of European Integration Sector of the EU Delegation to Serbia Freek Janmaat at the presentation EU Glossary project aimed at bringing people closer to EU terms and the way it works.

“Also, approach to subsidies should be more focused, in general. Their influence is still high, accounting for 2.8 per cent of GDP, whereas the EU average accounts for 0.8 of GDP, which makes a huge difference,” Janmaat said.

According to him, another issue is failing to report certain subsidies to the Commission for State Aid Control, as prescribed by law. Janmaat said there is progress in reforms – economy has grown, and estimates show that in 2016 it should reach 1.5 per cent.

Current payments deficit is decreasing, inflation is low, and employment rate is steadily decreasing, even though it remains high – around 17 per cent, said Janmaat at the EU Info Centre.

“We have, however, reservations regarding future fiscal policy,” Janmaat said, adding that Fiscal Strategy envisages deficit of 3.7 per cent, almost the same as in 2015.

He also cited other issues which should be dealt with in order to improve economy situation, including para-fiscal charges, too many pending cases in courts and mismatch of education with labour market requirements.

When asked whether joining the World Trade Organisation was one of the EU membership requirements, Janmaat said it indeed was and should be Government’s priority following the elections not only because of the positive message it conveyed, but also because it decreased the risk of WTO members imposing new requirements on Serbia.

“Regarding legislation and Serbia’s joining the WTO, the main requirement is to amend the law on GMO,” said Janmaat, adding that this action would bring no additional risks, given the EU’s high standards regarding permits and labelling of GMO products and their traceability on the market.

Editor of EU Glossary Vladimir Medovic said goal of the project was to draft a comprehensive EU dictionary which would contribute to better understanding of the EU its terms, functioning and EU accession in general.

The glossary will contain more than 250 entries, divided into two main sections – EU and its Member States and EU-Serbia relations – and five thematic areas, he said.

Participant in the project Dina Rakin said the project kicked off in August 2015 and so far, 50 entries have been processed. The Glossary will be available in print and electronic version in early 2017.

Professor at the Faculty of Political Sciences Slobodan Samardzic said the Glossary should also encompass the ongoing situation in the EU.

Representatives of Serbian European Integration Office and Serbian Chamber of Commerce also took part in the presentation of the Glossary. The project is implemented by European Movement in Serbia, with the support from the EU.