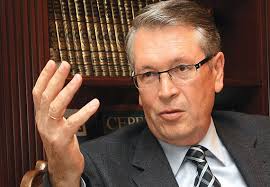 This has been one in a series of lectures given by the Ambassadors accredited to Serbia, which are organized within the Basic Diplomatic Training Program for 2015/2016 – course “International Relations and Foreign Policy of the Republic of Serbia”.

After the welcoming address by the Head of the Diplomatic Academy, Ms. Mirjana Milosavljevic, Ambassador Chepurin talked about the important events from the recent history of international relations which had a crucial impact on shaping the Russian Federation’s current foreign policy position.

Referring to the geopolitical, economic and security aspects of contemporary international relations, Ambassador Chepurin put special emphasis on the relations between the Russian Federation and the Republic of Serbia.

At the same time, the Ambassador underscored the importance of dialogue and cooperation between major international factors in political developments today, as well as the necessity of solving problems by peaceful means.

The questions of listeners were directed at more concrete ways of improving bilateral cooperation, and at Russia’s role in current events in the international political arena.