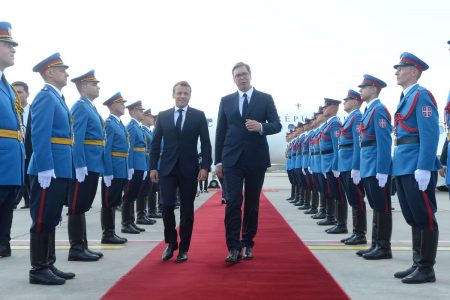 A visit to Belgrade and the messages from Emmanuel Macron, on the day of the election of the new European Commission President Ursula von der Leyen, confirm the French president’s desire to take the lead in Europe
By ALEKSANDAR SIMURDIĆ, Vice-President of the European Movement in Serbia

The first official visit to Belgrade by a French president in 18 years was heralded by Emanuel Macron’s desire to foster rela-tions between France and Serbia, which, burdened by a series ofevents, have been recording a negative trend over the past 25 years. In a statement ahead of the vis-it, the French president underlined his wish to “restore and strengthenbroken ties”, which have been characterized more by periods of misunderstanding than cooperation in recent decades. The consideration of the French-Serbian relations from the Serbian perspective, especially since 1918, and in spite of all the ups and downs, must take into consideration the deeply rooted, almost mythical image that France has had among the Serbian people after World War I.. The consequences of these deepest brotherly feelings towards France, as a timeless result of the alliance in the Great War, have remained visible to this day. Kalemegdan Fortress in Belgrade bears the inscription “We love France just like France loved us 1914 – 1918” which was further solidified by the French President’s speech, which he gave in the surprisingly good Serbian language, on the For-tress (he was also proud to point out that Belgrade is the only non-French town that bears the medal of the Legion of Honour). All the latter relations had to take into account the Serbian perception of France, even when NATO was bombing Yugoslavia, which was mainly perceived as an US-led campaign in which France, though an active participant, was hardly mentioned as an aggressor.A visit to Belgrade and the mes-sages from Emmanuel Macron, on the day of the election of the new European Commission President Ursula von der Leyen, confirm the French president’s desire to take the lead in Europe. Pressed by discontent and unprecedented challenges (migration, terrorism, protectionism, social and econom-ic inequalities), national govern-ments in the European Union are keen to underline the issues that divide them while forgetting those that unite them.While the rest are mostly turn-ing to the other side, Emmanuel Macron, driven by the desire tojustify the position of the “new leader of Europe”, imposed on him in 2017 by the American Time magazine, wants to take the helm of Europe in the face of numerous unresolved issues such as Brexit, Russia, Turkey, the migrant crisis, the eurozone crisis and (un)predictable transatlantic cooperation. Increasing inequality, rising populism, the fluctuation of illegal mi-gration, low growth, the negative effects of globalization, growing regional disparities, terrorism and security are the problems that Eu-ropean societies share in the 21st century. Despite strong criticism, Macron was able to offer the first concrete proposals for the recovery of the Union to regain the trust of citizens, restore the union of the remaining 27 Member States and establish full control of the Union, after years devoted to unsuccessful crisis management.The French strategy for the Western Balkans, released in late April this year and adopted at the request of President Macron, aims at more active participation by France in the stabilization of circumstances in the Western Balkan region, its socioeconomic development and the strengthening of the rule of law. The strategy is in line with the EU’s activities on supporting and bringing the region closer to Europe. This is an ex-pected outcome following a series of signals indicating that the EUenlargement policy is problematic. The EU is on track to lose credi-bility while the Western Balkans is on track to lose its hopes for enlargement. The future of the enlargement process will depend on the ability and willingness of bothparties to understand and accept that it is not about “us” and “them”, hence, it is not necessary to have a shared goal. The Balkans should no longer be on the table but at the table. That is the only way to break the vicious cycle whereby the re-gion is pretending to integrate and the EU to expand.The French president is well aware of the global changes that are putting Europe and the Balkans on the margins of the domains of power and global trends. Europe is becoming a periphery of world events, with the potential to preserve possible leverage in certain traditional spheres of influence, that can, to some extent, still influence global movements and processes. The Balkans is the periphery of Eu-rope (or rather, the periphery of the periphery), which must make us think about our position and influence in this context.Serbia’s path towards the EU and the relations in the so-called Western Balkan region are laden with the legacy of the recent past, which featured heavily during the French president’s visit to Belgrade. France is actively participating in the so-called Berlin Process, which, at the moment, is the mostimportant and also the only concrete path to the European future for the Balkans.President Macron’s willing-ness to, together with the German Chancellor, contribute to expediting the resolution of outstanding bilateral issues in the region will be put to the test in early September in Paris. Reaching the highly desirable outcome, that is the warming up of the Belgrade-Pristi-na dialogue, by the end of the year is very questionable, in the light of recent developments in Pristina. During the two-day visit, the two sides also talked about im-proving economic cooperation. Twenty-two documents, of differ-ent levels of obligingness, were signed and exchanged with the view of promoting economic co-operation. The effects of their implementation will be tested in the coming period. Preferably, as soon as possible.