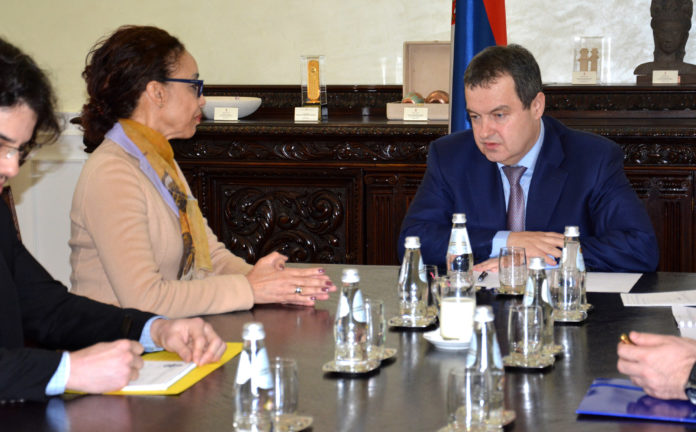 Minister Dacic wished the Brazilian Ambassador a warm welcome, and he pointed to the importance Serbia attached to bilateral relations with Brazil as its most significant political and economic partner in the region of Latin America, relations characterized by a high level of mutual understanding and non-existence of outstanding issues. He thanked for the full support the Republic of Serbia received from the Federative Republic of Brazil regarding the issue of Kosovo and Metohija, as recently confirmed by Brazil’s voting against the so-called Kosovo’s membership of UNESCO.

During the talks, they jointly ascertained the interest for further improvement of cooperation in all areas, primarily with a view to raising the economic cooperation to a level that would correspond to the good political relations and the existing potential.

Ambassador Heyvaert thanked the Minister for the cordial reception, and she emphasized her pleasure at having the opportunity to get to know better Serbian customs, people and culture. She expressed her hope that the positive trend of cooperation would continue in the future, and she conveyed the belief that the Brazilian Government would not change its position on Kosovo’s unilateral declaration of independence.

EMBASSY OF THE REPUBLIC OF FRANCE National Day: July 14th

23julalldayalldayEMBASSY OF THE ARAB REPUBLIC OF EGYPTNational Day: July 23rd