EMBASSY OF THE ISLAMIC REPUBLIC OF PAKISTAN 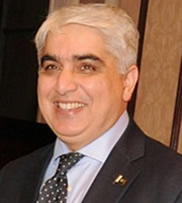 Holds Masters in Business Administration (2004) and Bachelors of Science (Honors, 1990)

Diplomatic assignments
Serving as Ambassador Extraordinary & Plenipotentiary of the Islamic Republic of Pakistan to the Republic of Serbia: September 2019 to date

Served as First Secretary/Counsellor at the Embassy of Pakistan, Budapest (Hungary): September 2006 – December 2009

Served as Third Secretary at the Embassy of Pakistan, People’s Democratic Republic of Algeria: December 1998 – September 2002

Mr. Shehryar Akbar Khan has served in the Pakistan Navy from 1985 and joined Foreign Service of Pakistan in 1994.

He is married and has two sons.