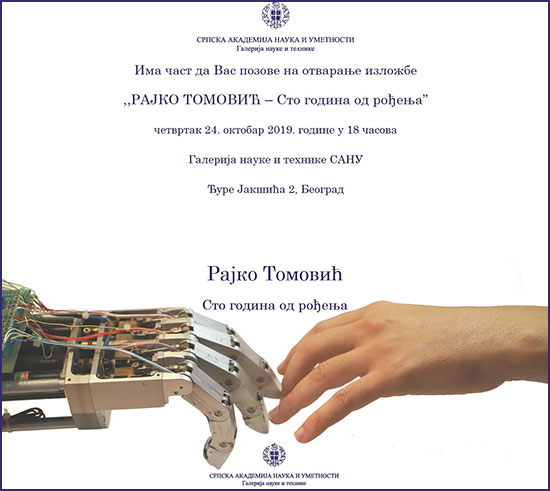 On the occasion of 100th anniversary of the birth of Academician Rajko Tomović, our renowned scientist, an exhibition will open at the SASA Gallery of Science and Technology, on Thursday, 24 October, at 6 p.m.

Rajko Tomović was a professor of the Faculty of Electrical Engineering in Belgrade, a constructor of the first special computers for solving differential equations and a creator of the so-called ‘Belgrade Hand Prosthesis’, which represented one of the first attempts in the world to build an artificial organ with a sense of touch. In his scientific papers, he dealt with multidisciplinary research of artificial intelligence and biotechnology.

The exhibition, as part of an international conference organized in honour of Academician Rajko Tomović, features his numerous achievements and rich scientific work in the field of robotics development, as well as hybrid and digital computers. The exhibition also showcases great reputation and influence this scientist had in international circles.

Academician Zoran Petrović, director of the SASA Gallery of Science and Technology will address the audience, while Academician Dejan Popović, a member of the SASA Department of Technical Sciences has the honour of opening the exhibition.