The Ministry for Human and Minority Rights and Social Dialogue of the Republic of Serbia invited a wide range of state and non-state stakeholders to participate in the first thematic dialogue on the 2030 Agenda entitled „Sustainable Development Goals – Serbia 2030“. The hybrid event, which combined online and in-person attendance, was held on 10th May 2021 with support of the German and Swiss Development Cooperation implemented by GIZ within the “Public Finance Reform – 2030 Agenda” project. Around 100 people participated in the dialogue, amongst them Minister Gordana Čomić, Minister of European Integration Jadranka Joksimović, Prof. Dr. Slavica Djukić Dejanović in her capacity as Special Advisor to the Prime Minister on the 2030 Agenda, as well as high level representatives from the UN, the German and the Swiss embassies, and academia.

The keynote speakers’ addresses, followed by presentations of the Public Policy Secretariate, the Statistical Office of the Republic of Serbia and the “SDGs for All” Platform, set the ground for stakeholders from various levels and sectors of state and society to lively discuss the 2030 Agenda and its priorities for Serbia, to explore future steps in the achievement of a greater policy coherence and optimal mechanisms that are to facilitate, steer and secure implementation and monitoring of the SDGs. The process of elaborating an overarching sustainable development strategy for Serbia was seen as an opportunity to align different reform agendas including the EU accession process, the Green Deal for the Western Balkans and the 2030 Agenda with local needs and priorities. The importance of following an evidence-based, inclusive and participatory approach was highlighted by all attendants throughout the conference.

The way of proceeding, that has been formulated as a result of the dialogue, is to establish the Inter-ministerial Working Group for the implementation of the 2030 Agenda with respective pillar-addressing sub-groups: economic, social and environmental, develop the new Voluntary National Report for Serbia to be presented to the UN in 2022, and widen the dialogue in order to hear all the different voices and agree upon a common vision for the Serbian path towards sustainable development. The event was the first of its kind in a series of dialogue meetings planned to further discuss development priorities and share lessons learned on how Serbia can address its development challenges most effectively, amongst other as a consequence of the COVID-19 pandemic, and achieve the objectives stemming from various regional and international obligations by leaving no one behind.

The video recording of the event is available on the YouTube Channel of the Ministry for Human and Minority Rights and Social Dialogue of the Republic of Serbia. 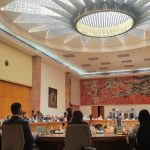 The post SERBIA 2030 – FIRST THEMATIC DIALOGUE ON THE 2030 AGENDA appeared first on Nemačka saradnja u Srbiji.