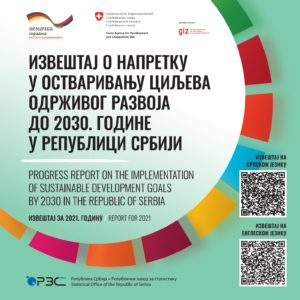 The member states of the United Nations, including Serbia, adopted the 2030 Agenda in September 2015 and committed to the strategic framework which encompasses all three dimensions of sustainable development: economic, social and environmental.

With the promise to “Leave no one behind”, the 2030 Agenda also commits to monitoring 17 Sustainable Development Goals (SDGs) and 169 targets to be met by 2030, which is based on a set of defined global indicators.

As the only institution in Serbia that measures and monitors the progress made towards the achievement of SDGs, the Statistical Office of the Republic of Serbia prepared a Progress Report on the Implementation of Sustainable Development Goals in the Republic of Serbia for 2021, with the support of the Governments of Germany and Switzerland within the project „Public Finance Reform – 2030 Agenda“ implemented by GIZ. The 2021 report is the second in a row and it aims to, based on data available in October 2021 (107 indicators), illustrate the current status in implementing SDGs in the Republic of Serbia. In this way, the evidence-based foundation for monitoring and further improvement of policies leading to meeting these goals will further be strengthened.

The main findings of this report as well as Serbia’s progress towards achieving the Sustainable Development Goals are presented in this video.

The post Serbia’s progress in achieving the SDGs appeared first on Nemačka saradnja u Srbiji.