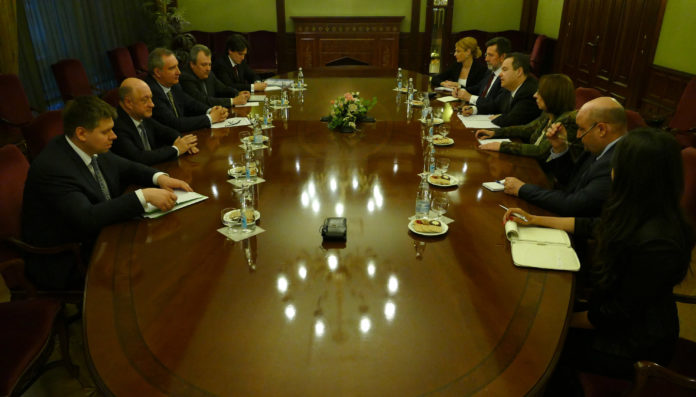 Ministers Dacic and Rogozin, who also co-chair the Serbia-Russia Intergovernmental Committee on Trade, Economic, Scientific and Technical Cooperation, considered the possibility of relocating the production of Russian car parts from Turkey to Serbia, as well as the involvement of Serbian civil engineers in Russian projects.

On this occasion, Mr. Rogozin said that Russia sought to enhance the cooperation with Serbia at all levels and stressed the importance of the Serbian-Russian humanitarian centre in Nis.

“The centre in Nis is a humanitarian centre and has nothing to do with defence matters. And now that the possibility of a large-scale demining operation of Palmyra in Syria has been raised, I see a great possibility for the Nis centre, but it has not been formalised yet. We think that signing of the agreement on the status of its associates should be accelerated, so that it could start functioning for what it was founded for,” Rogozin said.

On the same day, Minister Dacic also met with Russian Defence Minister Sergei Shoigu, with whom he discussed military-technical cooperation, training of military personnel of SAF in Russia and procurement of Russian arms.

The First Deputy Prime Minister asserted on that occasion that Serbia was interested in the development of military cooperation with Russia and announced that a special commission on military-technical cooperation between Serbia and Russia would meet on 13 April in Belgrade.

Dacic added that Serbia considered Russia its natural ally, with whom it had been closely cooperating for centuries and thanked Russia for the support it extended to Serbia and the Serbian people, particularly regarding the issue of Kosovo and Metohija.

He also stated that he had been successfully cooperating with Shoigu for years, and that they had also successfully collaborated in relation to the issue of the crisis in Ukraine, while he was the OSCE Chairman-in-Office.

Minister Shoigu assessed that the cooperation between Serbia and Russia was extremely active, and that the realisation of agreements reached at the highest level was a priority. According to him, the course of partnership enlargement had been confirmed during President of the Republic of Serbia Tomislav Nikolic’s recent visit to Moscow and his talks with President of the Russian Federation Vladimir Putin.

Mr. Shoigu invited Minister of Defence of the Republic of Serbia Zoran Djordjevic to attend the Fifth Conference on International Security to be held on 27-28 April in Moscow, where the fight against terrorism will be the central topic.

“We consider his visit a great opportunity to become acquainted personally and to exchange views on the key issues of our bilateral military cooperation. We have a full timetable of activities this year, including the negotiations between representatives of the respective Ministries of Defence, joint military exercises, mutual visits of delegations, as well as the preparation of military personnel,” stressed Shoigu.

Furthermore, he expressed hope that the members of the Serbian Armed Forces would participate in this year’s International Army Games in Russia as well.

Shoigu said that Russia continued to work on the humanitarian demining in Serbia and that considering the wide experience in that field, the demining of the Syrian Palmyra could be a significant joint project.

“When we founded the Serbian-Russian Centre in Nis, we assumed that we would carry out that work in other countries as well,” explained Shoigu. Moreover, he added that during the meeting a special emphasis was placed on security in Europe, including the situation in the Balkans.

Serbian Foreign Minister met yesterday in Moscow with Metropolitan of the Russian Orthodox Church Hilarion in order to discuss the commencement of works on the mosaic laying in the Temple of Saint Sava in Belgrade.

Metropolitan Hilarion said at the meeting that owing to the donation from “Gazprom Neft” of EUR 4 million for the mosaic laying in the Temple of Saint Sava the time had come to move towards a practical plan, since that amount was sufficient for the commencement of works. He also highlighted that the most important step now would be to call for bid for contractors.

Dacic asserted that Serbia was working to hasten the realisation and invited Metropolitan Hilarion to visit Belgrade and continue the dialogue with him.

First Deputy Prime Minister expressed his satisfaction over the cooperation between the two Churches and Russian Patriarch Kirill’s visit to Belgrade. “We are grateful for your help, particularly in respect to Kosovo and Metohija,” Dacic pointed out.