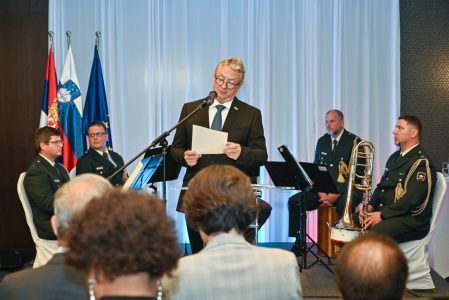 The Embassy of the Republic of Slovenia celebrated the 28th anniversary of the Statehood Day with a solemn reception at the Metropol Palace Hotel. The celebration was attended by several hundred officials, including representatives of the political and diplomatic corps, church dignitaries, as well as a large number of guests from the Serbian public and cultural life.

In his introductory speech, the Ambassador of the Republic of Slovenia to Serbia, H.E. Iztok Jarc, addressed the words of support for Serbia’s EU accession. “The road to the EU for a candidate country is never simple. Slovenia successfully completed its path to the EU 15 years ago; it is with pleasure that I can share with you my belief that we have gained a lot during this period as a state and as a society; benefits are even greater than it was originally expected. That is why we sincerely want Serbia to quickly and successfully advance towards the EU family and we are making efforts to support it“.

The Ambassador also emphasized his encouragement for the progress of good bilateral cooperation between the two countries, especially in the field of economy and politics. Economic cooperation between Serbia and Slovenia has recently been marked by a record trade exchange, with a significant margin exceeding a billion euros by a significant margin, and by large investment dynamics in both directions. Significant potential for cooperation exists in other areas, primarily in the IT sector, agriculture and knowledge transfer, where the focus is expected to be in the upcoming period.