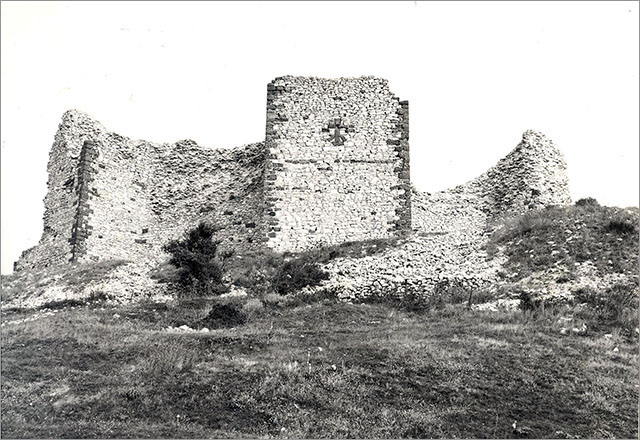 Explaining the politically motivated decision to stop archaeological research of Novo Brdo, an ethnic Albanian, once a major political leader in Kosovo and Metohija, Fadilj Hoxha stated in 1967: ’We are not interested at all, it is a Serbian monument’ (Gazette of the Serbian Archaeological Society 5/1989/142-144).

However, the aforementioned research started in 1952, had already yielded significant results. It confirmed the data reliability from written sources on that town which was founded and wholeheartedly supported as one of the most significant trade and urban centres of medieval Serbia by the rulers from the dynasties of Nemanić, Mrnjavčević, Lazarević and Branković. During the research, many puzzles were solved. Thus, for example, in the area of Lower Square of Novo Brdo, the foundations of a great Roman Catholic temple Santa Maria de Nuovomonte, so-called Saška Church (Saxon Church) were excavated. Additionally, in 1956, the remains of a monumental temple were uncovered and explored in the centre of a former bailey. Based on the somewhat more recent narrative sources, as well as on a myriad of excavated remains of Moravian stone plastic with Serbian inscriptions, and fresco fragments, also in Cyrillic, it was possible to conclude with certainty that it was an Orthodox Church of Saint Nicholas, which subsequently had been enlarged and had been used for a time as the seat of Novo Brdo metropolitans. After the fall of the town to the Ottoman rule, it was turned into a mosque. A fragment of an inscription in Serbian was found inside it, which was left by its master builder about his construction endeavours. Thanks to explorations by various sources, several other Orthodox temples and a smaller Roman Catholic Church of Saint Nicholas (Capella Santi Nicolai) which had served as a place of worship since 1642 when the Serbian Cathedral Church devoted to the same saint had already been turned into a mosque, have been acknowledged.

All these religious edifices, convincingly explain the multi-confessional and multicultural character of medieval Novo Brdo, where along with the Serbian population which was in majority, also lived and worked Saxons, citizens of Ragusa, Greeks, Albanians, citizens of Split, and later Jews and Turks. How much Serbian rulers cared about setting up a legal framework and determining city’s autonomy of this cosmopolitan environment, which had not been burdened by religious conflicts during their rule, is evident in the Statute of the town of Novo Brdo. It was issued by Despot Stefan Lazarević in 1412, as part of the Law on the Mines, the 16th-century transcript of which is being kept in our very house, in the SASA Archives. It is, therefore, even more difficult to understand the manipulation, happening nowadays, of the identity of Novo Brdo material heritage, representing a symbol of coexistence based on the respect of others, as well as the degradation of its monumental values.

Primarily, this is about the efforts of Kosovo institutions and the authority representatives to misrepresent the remains of the most important church edifice of Novo Brdo, the Orthodox Cathedral of Saint Nicholas, as the remains of non-existent Roman Catholic ‘Cathedral of Artan’. The official website of the Kosovo Ministry of Culture, Youth and Sport, which completely withholds the rich, Serbian past of Novo Brdo, for a long time has offered to its visitors a string of altogether unsupported claims on the Church of Saint Nicholas. Among other things, it states that ‘It is thought to have been Catholic cathedral’, although Novo Brdo had never been a seat of Roman-Catholic bishops before the church was converted into a mosque, that ‘regarding the form of building, it belongs to Romanic style’ (!!?), despite the fact that plenty of Moravian styled architectural plastic was excavated, that the ‘Cathedral’ was built by the citizens of Ragusa, in spite of plethora of Cyrillic inscriptions recovered at the site, including the master builder’s. This ‘ignorance’ is pretty surprising when two serious and extensive scientific monographs on Novo Brdo and its Church of Saint Nicholas, have been published in recent times both bilingual, in Serbian and English (V. Jovanović et al, Novo Brdo, Belgrade 2004; M. Popović, I. Bjelić, St Nicholas Church, the Orthodox Cathedral of the town of Novo Brdo, Belgrade 2018).

Unfortunately, concealment of scientifically established truth and incorrect data presentation were just the first steps to the unacceptable direction. Completely ignoring several year-long research, published in the aforementioned books, the Archaeological Institute of Kosovo with the support of the German Embassy in Priština, began scientifically and professionally unfounded ‘reconstruction’ of the older part of the Church of St Nicholas – giving it the shape of three naved basilica, which it certainly had not had. And while many old Serbian churches destroyed in 1999 and 2004, whose appearance is perfectly well-known, remain in ruins (Mušutište, Rečani, Dolac, Čabići, etc.), one long-time-ago destroyed temple is being reconstructed entirely randomly. It is worth mentioning that the Kosovo authorities have recently prohibited the reconstruction of the Church of St Nicholas in the Monastery of the Holy Archangels in Prizren, although there are much more data for its reconstruction than for the reconstruction of Novo Brdo Temple. It is obvious that this has nothing to do with a desire to reconstruct ancient church monument in Novo Brdo, but with an attempt of tendentious construction of its new identity. Severe damage has already been inflicted upon the remains of that temple by the works in the first phase, and it will tragically grow if the project of ‘reconstruction’, for which there are no scientific and professional conditions, is not immediately suspended. It is important to note that multi controversial ‘reconstruction’, has started without the consent of the Council for supervision and monitoring, a member of which is the Serbian Orthodox Church. It appears particularly cynical that the highest officials of the so-called Republic of Kosovo have repeatedly stated that the temple, whose confessional identity and appearance have been arbitrarily altered, represents ‘a proof of coexistence in these regions’. The successors of Fadil Hoxha are apparently ready to go further than him in the lack of political principles by being blind to the available scientific data.

It is particularly disturbing that a completely inappropriate attitude towards the Cathedral Church of St Nicholas could serve as a model for future research, study and presentation of the Serbian monumental heritage, both in Novi Brdo and in the whole of Kosovo and Metohija. The confirmed, systematic and persistent attempts of provisional Kosovo institutions, such as the one of the aforementioned Ministry of Culture, Youth and Sport, to conceal and fabricate the identity of this monumental heritage, i.e. reduce its significance as a whole, represent a very serious threat with far-reaching consequences and a true challenge to the cultural public of the civilized world. Since most often it is about religious edifices, these attempts pose a challenge to all religious communities. When it comes to the Cathedral of Novo Brdo, particularly called upon to give a reply is the Roman Catholic Church, which can find an exemplar in its own ranks. When, in 1610, the Archbishop of Bar Marin Bizzi mentioned the conversion of the Cathedral temple of Novo Brdo into a mosque, he did not hide that the Turks turned ‘a beautiful and splendid church that used to belong to Serbian despots into a mosque’.

For its part, the Serbian Academy of Sciences and Arts, its Department of Historical Sciences and the Academy Board for the Study of Kosovo and Metohija, will persist, as before, to base its opinions and reports on a monumental heritage of the region exclusively on the facts. With regard to this, it should be mentioned that the SASA has recently published a voluminous publication Artistic Heritage of the Serbian People in Kosovo and Metohija. History, Identity, Vulnerability, Protection, in Serbian and English, in which problems of the mentioned heritage have been historically contextualized and thoroughly analysed.