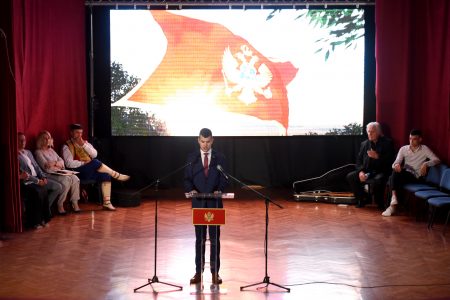 The audiences enjoyed a rich cultural and artistic programme with an accent on the preservation of the Montenegrin national integrity. The guests included the representatives of the diplomatic corps and the cultural and political figures both from Montenegro and Serbia. The President of the Montenegro National Association and the celebration’s host, Aleksa Giljen gave a welcome speech.

Mr. Giljen illustrated the importance of the 13th July uprising by quoting the French philosopher and writer, Jean-Paul Sartre who said: “it was a Second World War phenomenon and the biggest event in the history of humankind after the French bourgeois revolution”.

Mr. Giljen also said that by holding such a celebration in Serbia, “we are sending a message that the Montenegrins in Serbia should not feel like strangers and that Serbia is not a foreign country to them.” He also said:” We would like to invite both the Serbian and Montenegrin governments to carefully examine every decision they make and take into consideration that certain decisions can ruin the cohabitation of the two peoples, both in Serbia and Montenegro, as well as lead to new tensions in the bilateral relations between the two countries.”

The President of the Association of Montenegrins in Lovćenac, Nikola Muhadinović also addressed those present, thanking them for coming and adding that Lovćenac was justly called “the heart of the Montenegrin diaspora”.

A great friend of Montenegro, Mr. Nenad Čanak said that he was a Serb (a Vojvodinian) by birth but a Montenegrin by conviction.

On his behalf and behalf of the Democratic Party of Socialists of Montenegro, Mr. Balša Vujošević thanked the organizers for inviting him and offered his full support while saying that he hoped that such event would become a tradition.

After quoting a prominent Montenegrin intellectual, politician and diplomat, Veljko Vlahović in his speech dedicated to Montenegro, Mr. Vujošević also said: “This is the Montenegro that has to continue being a part of history. Enough with the clamour of fights and drunken wars of desperation and darkness! Montenegro has chosen the Euro-Atlantic path for its future, thus securing a future without tears or sins of freedom. Montenegro is now firmly on the path of peace.”

Mr. Vujošević also underlined that it was his honour to speak about the famous events from the past because “we, the Montenegrins, see 13th July as the brightest symbol of our freedom. The two most important statehood dates for Montenegro, which the destiny brought together in a single date, 13th July, represent a symbolic crown of the history of Montenegro – 141 years since Montenegro’s was internationally recognized as a state at the Berlin Congress, following the glorious battle in the village of Grahovac, and 13th July, 1941, when one of the biggest rebellions in the Second World War began in this poorest part of Europe. The all-people uprising on 13th July against fascism built a solid foundation for the common life and the brotherhood of the people living in this part of the world.”

“To build such a Montenegro, we need the help of people who carry Montenegro in their hearts and whom Montenegro treats as its children. In honour of the glory of the heroes that made it possible for us to celebrate this holiday today! In honour and in the name of the generations who will make new accomplishments and make Montenegro proud! Long live Montenegro!” Vujošević concluded.