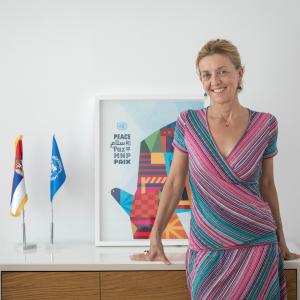 Ms. Jacob brings 24 years of experience in humanitarian and development work, including 10 years of service to the United Nations Office for Project Services (UNOPS) in Asia/Central Asia, Eastern Europe and Africa. From 2017 to 2019, she has served as UNOPS representative to the EU institutions in Brussels. Prior to that, she was the UNOPS director for South Asia (2011-2017). She held management positions with UNOPS, UNRWA, ECHO(EU), NGOs and the private sector in Afghanistan, the Middle East, East Timor, Sudan, Montenegro, Uganda, Rwanda and the Democratic Republic of Congo.

She holds a Master of Business Administration from ESSEC, in Paris.

The United Nations in Serbia

UNCT in Serbia currently comprises 19 UN Agencies, Funds and Programs, both resident and non-resident who work together to advance national development priorities in line with the Agenda 2030 and 17 Sustainable Development Goals.

The Team is coordinated by the UN Resident Coordinator and operates under the Development Partnership Framework – DPF (2016-2020) signed between the Government of the Republic of Serbia and the UN Country Team. The Framework is a road map for strategic cooperation for the further promotion of good governance and the rule of law, development of social and human resources, economic development, growth and employment, environmental protection, fight against climate change and building resilient communities, and integrating culture into the overall process of sustainable development.

During the first three years of implementation of the DPF 2016-2020, UNCT Serbia delivered US$ 193 million worth of assistance of which US$ 150 million was delivered for regular development activities and US$ 43 million for refugee/migration related activities.

The UN presence in Serbia also includes the United Nations Office in Belgrade (UNOB). By agreement with the Government of the Republic of Serbia, UNOB conducts political reporting and liaison functions. UNOB is the main channel of communication between the United Nations Interim Administration Mission in Kosovo (UNMIK) and the Government of the Republic of Serbia, as well as the diplomatic community in Belgrade on matters relating to the implementation of Security Council Resolution 1244 (1999). The Office facilitates the contacts of UNMIK, including those of the Special Representative of the Secretary-General and provides assistance, when requested, to UNMIK and other international presences in Kosovo. UNOB reports to the United Nations Department for Peace Operations and UNMIK on all Kosovo-related issues. UNOB also monitors regional developments in the Western Balkans of relevance to the United Nations. It reports to the United Nations Department for Political and Peacebuilding Affairs and UNMIK on all non-Kosovo-related regional issues. UNOB also works closely with the United Nations Country Teams and other partners on these regional issues.