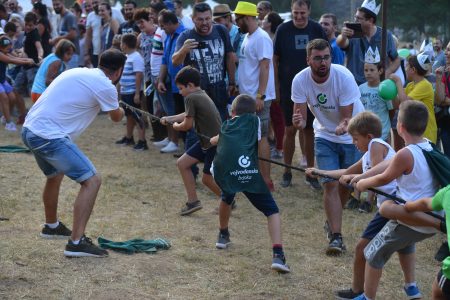 Visitors of the Just Out International Knights Festival, which took place from 23rd to 25th August at the Manasija Monastery in Despotovac, had the opportunity to socialize and learn more about archery from the best Serbian archers. Vojvodjanska Banka, as the main partner of the festival, organized a series of activities in the children’s village during the three festival days, while meet and greet with athletes was realized in cooperation with the Serbian Olympic Committee.

The Just Out Festival commemorates 600 years since despot Stefan Lazarević built Manasija, one of the most beautiful medieval buildings. This year, the Festival had over 600 participants from 25 countries around the world wearing medieval equipment, with an estimated 100,000 people attending the festival.

At this year’s Just Out Festival, sponsored by the Ministry of Trade, Tourism and Telecommunications, the organizers juxtaposed the modern and the medieval. The visitors also enjoyed the music programme and other activities, such as ax and spear throwing, horseback riding, fencing for children, armour workshops, etc.